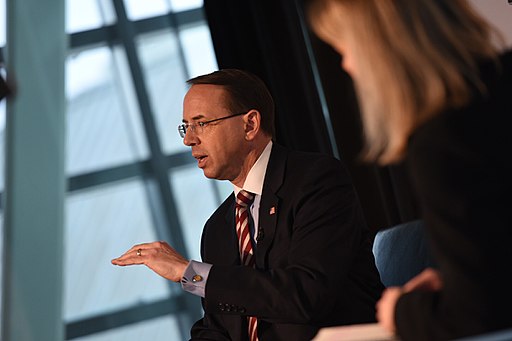 Deputy Attorney General Rod Rosenstein is reportedly leaving the DOJ in coming weeks. Or after nominee for AG Bill Burr takes office. And he means it this time–for sure. Probably.

Deputy Attorney General Rod Rosenstein is expected to leave his position soon after William Barr is confirmed as attorney general.

That’s according to a person familiar with the plans who wasn’t authorized to discuss them publicly and spoke to The Associated Press on condition of anonymity.

Barr has a confirmation hearing before the Senate Judiciary Committee next week and could be confirmed within weeks.

Rosenstein had been overseeing the day-to-day operations of special counsel Robert Mueller’s investigation into Russian meddling in the 2016 election and contacts with the Trump campaign.

Once confirmed, Barr would assume oversight of the probe.

The person familiar with the plans said there was no specific date for Rosenstein’s departure. It is common for attorneys general and other Cabinet secretaries to have their own deputies.

If this sounds familiar, that’s because it is. President Trump has been less than subtle in his displeasure over the Mueller investigation, whose oversight fell to Rosentstein when former AG Jeff Sessions recused himself. The DAG has been under constant fired/resigned watch ever since. In April of 2018, The New York Times reported on one of several alleged instances where President Trump had to be dissuaded from firing Rosenstein:

After Mr. Trump publicly exploded against Mr. Rosenstein this month, Mr. Sessions called Donald F. McGahn II, the White House counsel, to warn that firing the deputy attorney general would have damaging consequences, including the possible resignation of Mr. Sessions himself, according to a person briefed on the conversation.

Mr. Sessions told Mr. McGahn that the president needed to know that he believed that firing Mr. Rosenstein would be a misstep and that he had done nothing to justify such an ouster.

A long summer of simmering tensions seemed to come to a head in September, when a series of events that can only be described as chaotic became public via reporting by Jonathan Swan at Axios on Sept 25th:

Rosenstein offered his resignation to White House Chief of Staff John Kelly on Friday (Sept 21, 2018) and reiterated his willingness to resign over the weekend. He was working with the White House on the terms of his departure, and the plan was to make it public on Monday. After Axios published its story — which conveyed too much certainty to a fluid situation by presenting Rosenstein’s resignation as a done deal — chaos ensued and Rosenstein appeared to reverse course.

What I don’t yet know: How exactly the conversation between Rosenstein and Kelly changed on Monday. I don’t know what terms he had demanded and how, if at all, his demands changed from Friday to Monday. As of now, it’s possible that he remains Deputy Attorney General for the foreseeable future. He meets with President Trump on Thursday.

Important context: Trump has long been fed up with Rosenstein, and sources close to the president have told Axios for months that he would love to find a politically advantageous way to get rid of him

To the surprise of many, Rosenstein walked out of that meeting still at his post and things appeared to have settled down afterwards, at least by Trump administration standards. But the timing here does appear to indicate Rosenstein really is on the way out this time. Incoming AGs usually want their own deputies and staff. But his oversight of the Mueller probe and the year-long dramas of will he/won’t he be fired will drive much speculation as to what it all means. Or doesn’t. We will see.