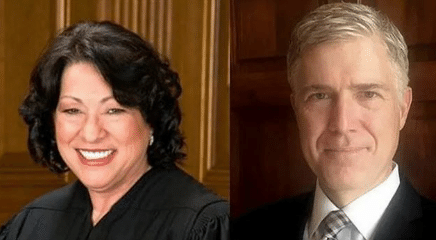 The Supreme Court of the United States (SCOTUS) is a politicized entity. There is simply no denying that, and the political sphere has long since given up the pretense that it isn’t. Acknowledgment of that fact is evident in the discourse on the left and right, advocating the appointment of conservative/liberal jurists or lamenting the appointment of liberal/conservative jurists. There is an assumption that one side’s preferred nominee will opine consistently along partisan lines. Then there is consternation when that justice, having secured his lifetime seat, rules in a way that seems to betray their perceived ideology.

When this happens, we find strange bedfellows in opinions joined by seemingly opposite members of the court.  When a justice who is believed to be conservative sides with the “liberal judges” on an issue, as John Roberts did on the Affordable Care Act, the betrayed right cries foul and throws out “centrist” with the vitriol normally reserved for criminals and communists.

But there are some issues that are more likely than others to obliterate the partisan line. Recently, we have seen Neil Gorsuch and Sonia Sotomayor team up for a common cause: the constitutional rights of criminal defendants. In November, the two joined in a rather forceful opinion criticizing the decision to deny certiorari in an Alabama case in which a defendant was convicted of DUI without the testimony of the forensic analyst who tested the defendant’s blood. Gorsuch and Sotomayor believed the lower court violated the defendant’s rights under the confrontation clause.

A few weeks later, the two were very vocal in their skepticism during the oral arguments of an Indiana case challenging forfeiture. Gorsuch and Sotomayor listened incredulously as the state’s solicitor general argued that the excessive fines clause of the Bill of Rights has not been fully incorporated to the states and that yes, it would be a proper exercise of forfeiture power for a Bugatti to be seized if its owner broke the speed limit by five miles an hour. While most of the justices appeared bemused and unconvinced, Gorsuch and Sotomayor responded with forceful rebuking of the state’s arguments.

Then just this week, the Court refused to grant review on another sixth amendment issue; this time, it was whether or not restitution orders are subject to findings of fact by a jury. Justice Alito wrote a brief opinion explaining the refusal, insinuating that he is not fully convinced that any sentencing of a criminal defendant need be based upon findings by a jury. Gorsuch again wrote a dissent from the denial of cert, joined by Sotomayor.

Gorsuch and Sotomayor’s staunch defense of the rights of criminal defendants is reminiscent of the late Justice Antonin Scalia, who, while the bane of many liberal causes, was nonetheless often appreciated on the left for his sixth amendment jurisprudence (though it is worth noting he did once cast a dissenting vote to overturn Miranda v. Arizona). Notably, it was a Scalia decision that underpins the argument advanced by Gorsuch and Sotomayor in the restitution case: the 2000 decision in Apprendi v. New Jersey, which struck down a New Jersey statute permitting a judge to make additional findings of fact, outside of the jury, in determining sentencing. Scalia also often landed on the side of Fourth Amendment rights; he wrote the 5-4 majority opinion in Kyllo v. United States, which held that the warrantless use of infrared technology to “search” inside a home–in that case, looking for evidence of the hot lights of a marijuana grow–was unreasonable.

Gorsuch, whose appointment to the Court has been hailed as one of Donald Trump’s few shining achievements, has shown his willingness to side with his liberal brethren, joining the 5-4 majority in Sessions v. Dimaya which struck down a federal mandatory deportation law. Brett Kavanaugh, Trump’s other SCOTUS pick, likewise caused consternation by failing to dissent when the Court declined to take up a case involving Planned Parenthood (Gorsuch signed on to Justice Thomas’ dissent.)

Some schools of thought posit that the lifetime nature of a SCOTUS appointment allows justices to relax their partisanship a bit. They are not beholden to any political action groups or voting blocks, which should allow for objective legal analysis and decisions based on the law and legal principles rather than political ideology. But reasonable minds can differ there, and there is, of course, a difference between non-originalists, pragmatic non-originalists, textual originalists, intentional originalists, etc. Because there are so many approaches to interpretation, we can understand, or justify, differences in judicial opinion without imparting nefarious activist intent. Likewise, nefarious activist intent can be disguised under any one of these labels. So when a “conservative” justice sides with the liberal contingent, or vice versa, it is dismaying to those who like their justices partisan.

The ideological splits get most of the attention, but the truth is that more SCOTUS decisions are unanimous or close to unanimous than we think, and are much more common than 5-4 splits. This past summer’s decision in Masterpiece Cakeshop was 7-2, far from the dogmatic divide many expected.

This is not to suggest that no justice ever performs a contortionist act to conform a particular analysis of an issue to his or her personal opinion as a means to a desired end. Many neutral observers would agree some serious acrobatics were at play in Shelby County, for instance, while others point to Obergefell as a stretch of constitutional principles. And Plessy v. Ferguson, Buck v. Bell, and other travesties of justice from SCOTUS prevent any notion of an infallible court. But the emphasis placed on the politicization of the court is likewise misplaced.

Despite the nuance, and the ideological “crossover” evident in the vast majority of SCOTUS decisions, the general perception is of a divided Court, and that the cure for societal ills is to fill the bench with one’s favored ideologues. Fortunately, history shows that the justices more often than not make a sincere attempt to apply the law as they see it. The recent teaming of Sotomayor and Gorsuch on the important issue of the rights of the accused should inspire a little optimism in all of us.

12 thoughts on “SCOTUS’ Not So Odd Couple: Gorsuch and Sotomayor”