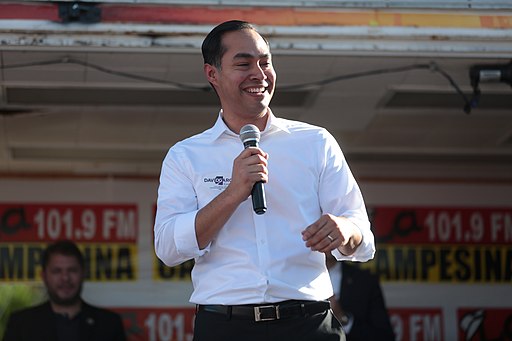 Julian Castro has announced his bid to be the Democratic nominee for president in 2020.

JUST IN: Former Housing and Urban Development Sec. Julian Castro announces his candidacy for president: “I am a candidate for president of the United States of America.” https://t.co/Cu08QouIQ3 pic.twitter.com/Xu2Z3q8pYL

Julian Castro, former mayor of San Antonio and housing chief during the Obama administration, formally announced on Saturday that he is seeking the Democratic nomination for the 2020 presidential election.

“Today we’re falling backwards instead of moving forward. And the opportunities that made America, America are reaching fewer and fewer people,” he said, flanked by his wife Erica and children Carina and Cristian in San Antonio’s Plaza Guadalupe, among a crowd of a couple hundred people. “That’s why we are here today. Because we’re going to make sure that the promise of America is there for everyone.”

Former U.S. Secretary of Housing and Urban Development Julian n Castro announces his candidacy for President of the United States in his hometown of San Antonio, Texas, Jan. 12, 2019.
more +

Introduced by his mother, local activist Rosie Castro, he said the country was going through a crisis of leadership under President Donald Trump.

His announcement was not surprising, Castro having made little secret of his ambition for higher office. Castro was very active in 2016 and 2018 elections campaigning for other candidates. At 44, he will be one of the younger candidates, something he is used to as he has been youngest city council member, youngest mayor, and youngest Obama cabinet official over the course of his career. He also took a stab at courting friendly media coverage:

Julian Castro, announcing his presidential campaign, notes he once wanted to be a journalist and calls press, “the friend of the truth in this country.” pic.twitter.com/7EVVsK5lwK

He was rumored to be on the shortlist for Hillary Clinton’s VP slot in 2016, but was passed over in favor of the more experienced Tim Kaine. Having not held office since, those same questions of lack of experience will come up again. But this isn’t the experience election for Democrats; it’s the “beat Donald Trump” election. Julian Castro, along with however many others join a rapidly crowding field, will need to make that case above any other merits. “There is a crisis today,” Castro said. “It’s a crisis of leadership. President Trump has failed to uphold the values of our great nation.” He starts his candidacy a decided longshot in making his case to be that leader, but who knows. Stranger things have happened.