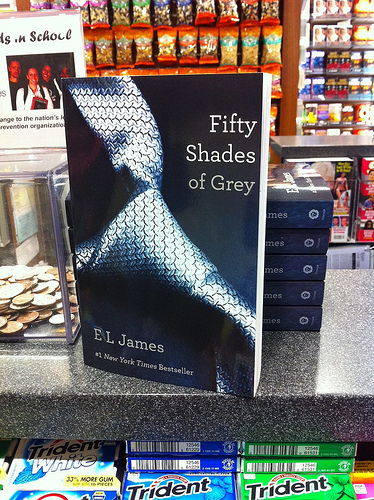 50 Shades of Grey is a novel (using the term loosely) that I had not only never read before, but that I actively tried to prevent others from reading.  That is not usually the way I roll in the book department.  After all, taste is a highly subjective and personal thing and I think people should read as much as they can of whatever they want – but there’s this rebellious streak in me that immediately hates it when a lot of people inexplicably find objectively bad things to be awesomesauce.  It happened with The DaVinci Code, it happened with Wonder Woman, and it happened with 50 Shades of Grey.

People, particularly young female people, should not read 50 Shades of Grey.  I’m taking a firm stance on that.

A few months ago my husband found a brand new set of all three 50 Shades books in the recycling bin at work, and knowing that I like books, kindly brought them to me.  They’ve languished on the shelf ever since but as I’m writing about romance novels this month, it only seemed fitting that I bite the bullet and read at least the first one.  So I did.

Anastasia Steele is – not unlike Isabella Swan from the Twilight series – a thoroughly average and exceedingly virginal young woman who, for reasons left unclear, is singled out by a superduperly good looking multimillionaire named Christian Grey for romantic attention.  Ok. Pretty standard romance novel script so far. The totally average girl, the rich and perfect guy who sweeps her off her feet because he sees something special in her that no one else does (including we readers).  But as it turns out, Christian Grey is into some highly kinky stuff, probably because he was abused as a child and molested as a teenager by an errant MILF.  So he’s all sadistic and controlling, but it’s totally not his fault, of course.

In the past, Christian Grey hooked up with women who were “submissives” – they enjoyed being the recipient of his sadistic attentions.  But that was no longer enough.  Mr. Grey found it more titillating to take unremarkable and inexperienced Anastasia from gentle deflowering to full sexual awakening to “please whip me with a cat o’ nine tails, sir” within the span of a few weeks than to have consensual, if unusual, sex with a chick who’s already into it.

You can probably see the obvious problem here.  But hey, it’s a romance novel. The sexually experienced man, the innocent novitiate – standard fare.  So the sexual awakening goes a little further than it does in some other novels. Big whoop. It’s meant as a fantasy, not as a call to violence.  Fifty Shades of Grey, if properly written, could have been a safe way for some women who are a little vi-curious to explore the concept in their heads without actually engaging in risky behavior.  It may be problematic, but the obvious problem is not why it is problematic.

Christian Grey wants Anastasia to sign a contract in which he gets to control basically every aspect of her life.  He wants to pick out the clothes she wears and the food she eats and to be sure she works out enough and all this other stuff.  BUT. And this is a BIG BUT. It is a BUT so big that Sir Mixalot would pull up quick to get with it. BUT. When Grey controls Anastasia, he only controls her into doing things that a) are for her health and general well-being and b) most women would find romantically appealing. That’s the fantasy part of it, you see.   Christian is a sexually sadistic controller, but he’s a sexually sadistic controller that only asks his victim do to things she’s totally on board with anyway.  Christian Grey is a sexually sadistic controller that only wants the very very best for his victim, because he cares.

We have left the realm of fantasy behind us and gone to the land of “that is frickin’ impossible, ladies”.

Because controllers don’t DO that.  Controllers don’t only ask you to wear totally cute clothes and drive a perfectly safe car and eat yummy nummy foods and work out a couple times a week because the Surgeon General said exercise is good for you.  Controllers don’t spoil you rotten and make you feel like the only girl in the whole wide world.  And controllers for sure don’t joke when you don’t message them back right away and don’t find it at all appealing when you stand up to them and deny them. Controllers make you toe the line. They make you do whatever it is that amuses them even if it’s only a fleeting whim on their parts, and they don’t care one iota about your well-being. They don’t care if you’re tired or hungry or sick or horny or not horny. They don’t care if you’re driving a crappy and unsafe car, or in fact any car, since a lot of controllers prefer that their ladyloves are stranded at home and unable to go anywhere at all.  Controllers don’t care if you’re lonely or sad or need to get something done for work. In fact, controllers often control their victims into situations where they ARE lonely and sad and unable to function at work.  Controllers want to control elements of their victim’s life that are really none of their business – like what they say and who they say it to and even what they think. And if they don’t get things the way that they want them, there will not be a polite conversation regarding a difference of opinion.  If they don’t get things the way that they want them, there will be hell to pay. The needs of a woman really don’t matter to a controller. And her wants certainly don’t matter. So for Christian Grey to want to control Ana all for her own benefit – nah.  Not real. And for Christian Grey to love Ana for her individuality and her challenging mind and her being the only one who ever told him no…nah to a factor of a billion.

But it’s a fantasy!!!!  Yes it is. Fun fact, there is something in women that finds controlling behavior sexually attractive.  Maybe not you, wise fellow female person who’s reading this article, but I’ll cop to it. I like it sometimes.  I like it in romance novels and I ~may~ even like it in real life. Sometimes. But the fatal flaw of Fifty Shades of Grey is that it packages female fantasy with a completely dishonest portrayal of controlling male behavior in such a blatantly and pathologically false way that I can see it easily setting a naive and inexperienced woman up for disaster.

There were so many red flags in Fifty Shades of Grey I was literally yelling at the book much of the time.  Good men do NOT act like Christian. Period, end of story.  If you’re dating a guy and he starts acting like Christian Grey, RUN.  If he tells you what to wear and what to eat and how often to work out and he displays resentment and jealousy towards your friends, RUN even faster.  If he shows up places you go uninvited and secretly watches you without you knowing he is there, RUN while you still can!  Don’t give him chance after chance to change, don’t assume he controls you because he loves you and wants the best for you.  He doesn’t. He only wants what is best for him.

Christian Grey is a stalker, a controller, a sadist, and a bad guy.   He’s also a fictional character whose fictional behavior in no way reflects the mindset of real life men who stalk, control, and enjoy inflicting pain on women.   Read the book if you must, but never lose sight of what is real.

Sometimes, a bad guy is a bad guy.

80 thoughts on “No Shades of Grey”