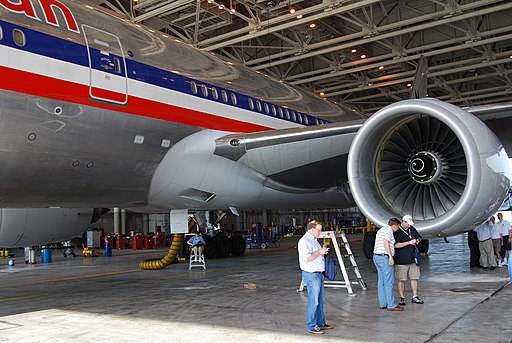 [TT1] Boeing hangs the biggest turbofan to date on the 777X prototype.  To give that some perspective, the engine is about the same width as the fuselage of a 737.  Boeing is also showing off it’s ideas for a new transonic wing (a wing designed to cruise in the transonic range, ~Mach 0.8 – Mach 0.95).  The challenge of transonic cruise is that it guarantees that some parts of the aircraft will experience supersonic airflow, while others are still subsonic.  Any flow that goes supersonic results in shocks that impact performance and fatigue life, requiring that the design account for that.  Long, thin wings are ideal for those cruise conditions, but a simple cantilevered wing that long and thin requires a lot of additional structure (read: weight).  The trussed wing gives additional lifting area and support, negating the bulk of the weight penalty.  From an Aviation Week article (login required):

The long-span wing folds just outboard of the truss junctions to enable the TTBW to use the same airport gates as a 737, which has a wing span of almost 118 ft.

The aircraft pictured appears to be conventionally powered, with turbofans mounted under the wing, but NASA is studying versions of the TTBW concept with hybrid-electric propulsion. These have electric motors integrated into the turbine engines. An electric-powered ducted thruster on the tail ingests the fuselage boundary layer and reenergizes the wake, reducing drag and energy consumption.

[TT2] Not to let Boeing have all the attention, Airbus is working on a “helicopter” that it thinks could hit 400 kph.

[TT3] Bell is putting it’s toes into the whole air taxi business.  Once upon a time, Bell was hoping to market a civilian version of the V-22 Osprey or the V-280 Valor for urban air ferry services.  Not sure if that is still a plan.

[TT4] LG says it has a production ready rollable OLED TV.  This is not a big screen OLED on a rolling cart, it’s an OLED screen that can roll up like a newspaper for out of sight storage in a media cabinet or credenza.

[TT5] Ford says no to Wi-Fi, yes to 5G.  Hammering out these kinds of protocols is kinda crucial to the development of fully-, or even semi-autonomous vehicles.

[TT6] The UK is testing a new kind of communications satellite, one that can be modified and reprogrammed while in orbit.

[TT7] China’s Far Side probe carried an extra antenna on it’s trip around the bend, one that will be able to listen to radio signals we haven’t really gotten to listen to since the 70’s.  Also in radio-astronomy, the Canadians have a new telescope called CHIME (seriously, do people honestly brainstorm names that make handy acronyms?).  Not only will CHIME help investigate the phenomena known as Fast Radio Bursts, it already answered one big question about them while it was basically booting up.

[TT8] Ya know how our ancestors thought the stars in the sky were gemstones in the firmament.  About that…

[TT9] Stellar Cow gives birth to a black hole, or a neutron star.  We think.

[TT10] Finally, we have a lead on why fake news propagates so readily.  It’s the Boomers fault.

My Favorite Little Brick HouseTech Tuesday 1/29/19 – Cool Sounds EditionTech Tuesday – Earthrise Edition
[archive]
Please do be so kind as to share this post.