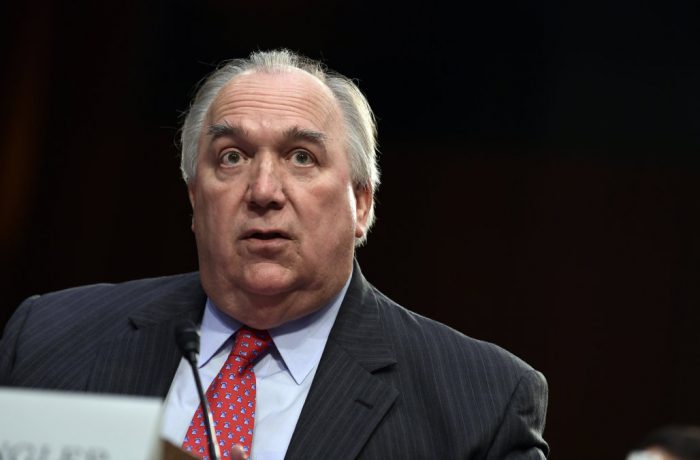 John Engler is Michigan State University’s interim president. He is also Michigan’s former Republican governor. He was installed in the aftermath of then-MSU president Lou Anna Simon’s sudden resignation. She had resigned in the aftermath of the revelation of Larry Nassar’s decades of abuse and her administration’s committed efforts to not do a damned thing about it.

Engler was a controversial choice from the start. Students and faculty member did not want Engler; they protested at every point during his appointment, describing themselves as blindsided by the selection of a man who, they argued, had no known ability to competently lead MSU through what was obviously its darkest hour. Engler was viewed as a politician first and considered completely incapable of healing a university community reeling from what had been revealed about Nassar and his enablers.

But Engler spoke forcefully at his appointment, insisting that he was capable of empathizing with Nassar’s victims and that he would work aggressively to heal the university. Engler’s champions, the school’s Board of Trustees, insisted that Engler would indeed prove a competent and caring leader during tumultuous times. The same board, at the same press conference, apologized collectively to Nassar’s victims, with one trustee saying publically, “We failed you.”

So, to recap: the same Board of Trustees* that had failed Nassar’s victims insisted that it should be trusted with the responsibility of replacing Simon, who was one of the many Spartan administrators who catastrophically failed Nassar’s victims. If that seems a bold play, well, at least it has worked out for them, as less than a year later, Engler has proven every bit the unifying leader that he promised to be, having not once stumbled, even slightly, in his work, something we can verify with a quick Google search that…

In Engler’s defense, he went almost three months before he was every bit the blundering, ham-fisted mistake that his critics swore he would be. In April 2018, Kaylee Lorincz reported that, in a meeting with the new president, Engler not only offered her $250,000 to drop her lawsuit against the school but insisted that her claims of abuse were designed to get her the kind of payout that he was offering. When she refused the money, Engler asked how much more it was going to take. Engler, having apparently badly misunderstood the fortitude of Nassar’s victims, was unprepared for Lorincz to make this accusation in a public meeting of the Board of Trustees. The Board of Trustees was not prepared either, and attempt to cut Lorincz’s microphone before being shouted down by attendees who demanded that she be allowed to finish making her statement. Engler later claimed that he had “different memories” of his meeting with Lorincz but insisted that those different memories could not be shared publicly.

Okay, so that is not ideal, but from that point on, Engler has been hitting home runs.

In June 2018, Engler’s emails were FOIA’d. In them were seething contempt for the trial lawyers who were suing MSU into oblivion. There was also fury at Rachel Denhollander, the first woman to come forward publicly about Nassar’s abuse. Engler alleged, without evidence, that Denhollander was both manipulating Nassar’s survivors and that she was getting kickbacks from those aforementioned trial lawyers, which is a remarkable charge to make, even privately. Denhollander has denied manipulating Nassar’s victims – women and families who had already been repeatedly manipulated by Nassar himself – or receiving kickbacks. A quarter of Nassar’s victims then asked that MSU’s Board of Trustees force Engler out, and find somebody more suited to the job. The Board declined to do so.

So, that was two mistakes – and bad ones at that – after which Engler settled into his role with aplomb and quiet dignity.

Except that less than two months later, Engler insisted that the university’s alumni magazine not address the Nassar scandal with a full issue dedicated to its horrors, an issue that would have mirrored a similar effort at Penn State University in the aftermath of Jerry Sandusky’s abuse. Engler instead mandated a different issue, one that celebrated himself. Word first leaked in June that Engler was doing this, but then the original issue leaked to the school’s student newspaper, which published side-by-side examples of what had been proposed and what Engler was willing to allow. They were two very different things. And in perhaps the least surprising news imaginable, very few people thought that Engler’s version was the better of the two.

But that, mercifully, was it, as Engler finally settled into his role. For four months. Then he decided to end MSU’s Healing Assistance Fund, alleging that it was being subjected to fraudulent claims. He did this in opposition to MSU’s Relationship Violence and Sexual Misconduct Expert Advisory Workgroup, which recommended that the fund continuing paying for what it had promised to pay for, while finding others ways to deal with alleged instances of fraud. Engler promised to reconsider the decision to freeze the fund, by which apparently he meant reconsider its existence entirely. (MSU’s Board of Trustees has since overruled Engler’s decision.)

But then finally, after his fourth mistake, Engler humbly admitted his own shortcomings, acknowledged fully his need to do better, and oh, dammit, he did it again, didn’t he?

Late last week, Engler decided that enough time had passed since he had last made a monumentally ignorant decision and so he decided to return to doing what he has done best: cramming both of his feet directly into his mouth. This time, he decided that what the Larry Nassar scandal and its subsequent fallout had been missing was his opinion about Nassar’s victims. So he offered as much during a meeting with The Detroit News, saying that Nassar’s victims were enjoying themselves a little too much, at least as far as he was concerned.

“You’ve got people, they are hanging on and this has been … there are a lot of people who are touched by this, survivors who haven’t been in the spotlight,” Engler told The News. “In some ways, they have been able to deal with this better than the ones who’ve been in the spotlight who are still enjoying that moment at times, you know, the awards and recognition.”

What Engler is presumably referring to are things like Nassar’s victims receiving ESPN’s Arthur Ashe Courage Award. After all, how dare they collectively respond to having endured abuse in a way that Engler himself does not personally approve of? This is a thing that Engler thought and then said out loud where other people could hear him say it. And in case he had not made himself clear enough, Engler then added that he was certain that MSU had done enough to properly respond to its myriad failures regarding its enabling of Nassar, and that the entire university community was ready to move on. Which was news to huge segments of the university community that are not yet ready to pretend away Nassar’s existence and the institution’s disastrous handling of him.

Well, yes, it is worth noting that, particularly because this final offense might prove to be Engler’s last. The Board of Trustees that hired him has since seen significant electoral turnover. And the Board’s newest president, Dianne Bryum, has pointedly said that Engler’s latest outburst was ill-advised. Here’s hoping that his end comes sooner rather than later, and that MSU finds somebody capable of doing the work that Engler’s critics rightly knew from the outset that he was incapable of.

UPDATE (Already!): The Detroit Free Press is now reporting that Engler is likely to get turfed as a meeting on Thursday morning. Here’s hoping the board is not nice about it.

ANOTHER UPDATE: And now multiple sources are reporting that Engler, having been told that he was about to be fired, will instead resign tomorrow morning.

A THIRD UPDATE: Engler’s resignation is effective immediately. Good riddance. Satish Upda, an administrative at MSU, has been appointed as an interim replacement. Although it is not entirely clear what background Upda brings that might prove more competent than Engler, there remains extremely difficult to imagine him being any worse.

Houston’s Police Department Has A ProblemCongresswoman Says Bad Word, Conservatives Feign OutrageTwo Reviews Of “Spider-Man: Into The Spider-Verse”
[archive]
Please do be so kind as to share this post.