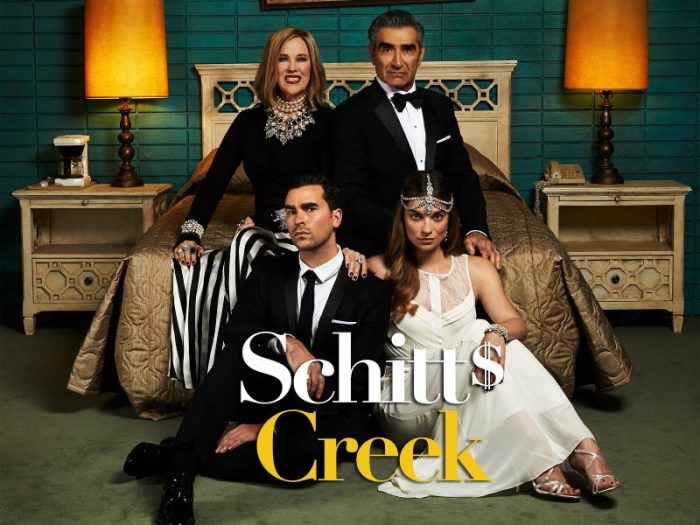 The Netflix series Schitt’s Creek could have easily been an absurdist cliché: filthy rich family loses everything and is made to live among the poors; hilarity ensues. And there are some familiar tropes: the dramatic and slightly off-balanced aging actress mother; the shallow, status-conscious beautiful daughter; the sexually ambiguous dandy son. The show could resort to the expected obvious jokes when these characters meet the salt of the earth townsfolk of Schitt’s creek. But the surprise here is how the show manages to only skirt the cheap gags and predictable slapstick and reveals some heart beneath the trite veneer.

The family is the Roses, whose fortune earned from a chain of video stores is wiped out by an unscrupulous Bernie Madoff type. What’s left is seized by the government, which cleans out their mansion right down to the wall-sized family portrait. But the one asset the government decides to let them keep is a small town purchased by Mr. Rose as a lark several years earlier: the little rural place called Schitt’s Creek. The family moves there, taking up residence in an expectedly old, rundown motel.

They are soon greeted by the town mayor, Roland Schitt (say that fast to get the joke), played by the always-gross (in my opinion) Chris Elliott. (Let me digress to say this: I detest Chris Elliott. He repulses me, and I don’t find him funny in anything I’ve watched. His appearance in the first episode nearly drove me to give up immediately. But I stuck with it, and while I still can’t stand him, I’ve learned to accept his place on this show.) The first issue the Rose family faces is that, if they wish to sell the town, the mayor must sign off on the plan. Because Mr. Rose (Eugene “the eyebrows” Levy) exasperatedly manages to offend Roland right off the bat (when he refuses to leave their motel room after settling in and stinking up the bathroom), he has to make nice if he is ever going to get his family out of Schitt’s Creek.

To be fair, there are still plenty of clichés of the rich-people-go-slumming variety, such as when Mr. Rose attempts to order eggs Florentine at the local greasy spoon, or when the Roses’ son David asks front desk clerk Stevie (female) if the motel has a business center. But while the show does hit some expected trite notes, it does so while still managing to avoid making contemptible cut-outs of its characters. Over the course of the first season, I found myself liking the family rather than simply laughing at their fish-out-of-water misadventures.

Family patriarch Johnny Rose, while obviously a business man used to having his way as well as the finer things in life, is not arrogant or insufferable. In lovable Eugene Levy fashion, he tries to make the best of the situation for his family. While it may be a bridge too far to suggest he doesn’t look down on the people of Schitt’s Creek, he nevertheless endeavors to be kind and polite. He is the character most outwardly devoted to his family, especially his wife, as he sets about the business of rebuilding their lives, trying to sell the town, and returning the family to their former glory.

The Roses’ children are spoiled, made obvious by the fact that they are adults around thirty and still dependent on their parents. Socialite daughter Alexis is statuesque and model pretty, prone to a wild streak, and in my opinion the character most in danger of being a one-dimensional stereotype at the series’ outset. She is on her cell phone, talking to her shipping magnate boyfriend “Stavros” who she says is coming to get her just as soon as “Mary Kate gets back with their private jet” (an apparent reference to the Olsen twin and her former boyfriend, Stavros Niarchos.) She is later seen picking up trash (community service from a DUI arrest) while wearing couture and very high heels. Alexis must share a room with older brother David, with whom she alternately trades insults and commiserates.

David, played by Eugene Levy’s real-life son, Daniel, is an extremely fashion conscious dandy, worried about how he will afford his skin care products and the thread count of his sheets. He comes off as effeminate, and after a tryst with the front-desk girl Stevie (played by a wonderful young actress I’ve never seen), it is revealed he is pansexual. When Stevie inquires, using wine as a euphemism, David replies: “Um I do drink red wine. But I also drink white wine… And I’ve been known to sample the occasional Rose. And a couple summers back I tried a Merlot, that used to be a chardonnay… Which got a bit complicated… I like the wine, and not the label.” It was a very nuanced scene, in part due to David Levy’s expressive face and amazing ability to emote subtly but effectively.

And then there’s Moira, the matriarch, played by Catherine “mom from Home Alone” O’Hara. Moira is a former daytime television star with an extensive wig collection who sleeps with a broach-adorned vest over her pajamas. She is the most dramatic and out-of-touch of the Rose family, prone to weeping in her closet after googling herself. She lacks a maternal quality, as evidenced by not knowing her own daughter’s middle name. But even Moira gradually begins to assimilate, running for town council and striking up a friendship with Roland’s wife Jocelyn, who was probably the most sophisticated person in the town prior to the Roses’ arrival.

Without giving too much away, through the arc of the first few seasons (which is as far as I’ve gotten), the family predictably begins to assimilate and form an appreciation for their town. Alexis finds two love interests within a few days of arrival (prompting Moira to caution her, “…a podunk baby out of wedlock is not something your father and I can afford to negotiate at this moment”); David has a charming friendship with Stevie and gets a job at the nearby (skanky, in his words) Blouse Barn; and even Moira surprises by investing her time and efforts into trying to beautify and improve the town — she even joins the local women’s choir. For his part, Johnny probably shows the least amount of character development — likely because he needs it the least. He is a kind of catalyst here, the “normal” family member grounding the rest. By the time he takes up office space in the local automotive garage, you’ve already been rooting for him to find his next successful business venture.

The best part of the show is how the family develops as a whole. Stuck in close quarters without the distraction of their separate, jet-setting lives, the family grows closer. The squabbling siblings exhibit surprising and subtle warmth toward each other; Moira rediscovers (or discovers for the first time) her maternal instinct when Alexis gets the flu. The season 2 finale was downright heartwarming. The family sticks together, their own kind of love and loyalty beneath the remnants of the superficial trappings of their former lives.

The show has also developed a good cast of supporting characters in the residents of Schitt’s Creek. At times, they are less likeable than the Roses (see: Chris Elliott). They are not star-struck by the family, nor are they hostile. They are welcoming, but unapologetic about their small-town ways.  They are somewhat offbeat and colorful–the show would be boring if they weren’t–but not outlandish or hackneyed.

Schitt’s Creek is not side-splittingly funny, nor is it a saccharine-sweet heartwarmer. But it is entertaining, it is a different spin on an old trope, and the acting is fantastic. I highly recommend it if you are looking for something new to watch. I also recommend you give it a few episodes before you write it off.

Unalienable, Except for Those PeopleWednesday Writs for 1/23Further Observations on SCOTUS’S Strange Bedfellows
[archive]
Please do be so kind as to share this post.

One thought on “Up the Creek”