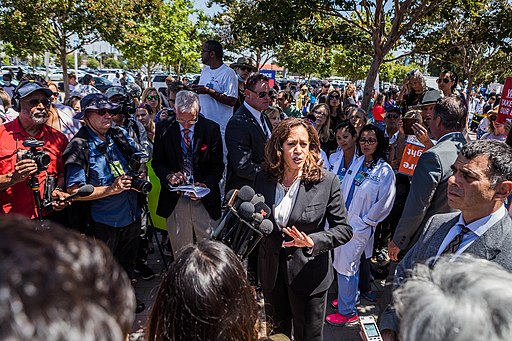 As had been widely reported, Senator Kamala Harris (D-CA) announced she will be seeking the Democratic nomination for president in 2020.

I’m running for president. Let’s do this together. Join us: https://t.co/9KwgFlgZHA pic.twitter.com/otf2ez7t1p

A 54-year-old former California attorney general and San Francisco district attorney, Ms. Harris is something of a bridge between the Democrats eyeing the race who are in their 70s, like former Vice President Joseph R. Biden, Jr., and Senator Bernie Sanders, and those in their 40s, like former Representative Beto O’Rourke and Senator Cory Booker. Further, while she hails from one of the country’s most famously liberal cities, she has ties to both the pragmatic and leftist wings of the party: she is rooted in the Bay Area’s Democratic establishment but has embraced a more progressive agenda since being elected to the Senate in 2016.

“I love my country,” Ms. Harris said on “Good Morning America’’ Monday. “And this is a moment in time where I feel a sense of responsibility to stand up and fight for the best of who we are.”

Ms. Harris is not yet well known to voters, but there is deep curiosity about her among the party rank-and-file as they face a Democratic nomination contest that is defined primarily by its uncertainty.

That part about being a “bridge” is no doubt part of the plan for the Harris campaign, but it also means being caught in the middle of a generation shift that the 2020 Democratic primary is shaping up to be a test of. So far, the pattern has been for a candidate to announce, then the parsing of record begins. With her candidacy being expected, that process started early for the junior senator from California, and her career as a prosecutor and AG of California was where critics started:

In part because of the complexity of Harris’ record, Bazelon touched off a vigorous debate about Harris’ criminal justice stances, both on Twitter and in early voting states like Iowa and South Carolina, where Harris is scheduled to visit next week.

If Harris runs, it is a debate that will likely play out for many months among her 2020 rivals, particularly as Harris tries to consolidate the African-American vote in South Carolina and the early states of the Southeast where that demographic makes up a large portion of the electorate.

The Democratic California senator, who has worked closely with Kentucky Republican Sen. Rand Paul on bail reform and co-sponsored legislation making lynching a federal crime, has clearly been expecting these attacks from the left, particularly as criminal justice reform became a focal point for Democratic activists.

In addition to traditional early state South Carolina, a change to 2020 that Senator Harris is also anticipating is the primary move of her home state California to early March for Super Tuesday, right after the traditional first four of Iowa, New Hampshire, Nevada, and South Carolina. The plan would be to grab an early, and insurmountable, delegate lead in a very crowded primary. Harris has her core staff in place, including some important names from both the Obama and Clinton campaigns of years past, and starts off with many considering her a strong contender.

How strong, though, is a matter of perspective. Nate Silver at 538 puts it this way:

Also in terms of her strengths, Harris has stood out among colleagues during Senate hearings, putting her prosecutorial skills on display with her sharp and quick questioning of witnesses. Debate performances can really matter in primaries, and the hearing performances suggest she might be strong in debates.

She’ll need to be. To be clear, all of Harris’ strengths outlined above are really potential strengths. In most national primary polls conducted so far, she’s been in the single digits. Those polls mostly reflect a lack of national name recognition, but Harris will have to build her support almost from scratch. And a lot could go wrong for her.

The biggest potential problem for Harris may be that her campaign simply never really catches on with voters. Despite seeming to reporters like me to be a strong candidate on paper, Harris could be the 2020 Democratic version of Marco Rubio or Scott Walker, who both struggled in the GOP’s 2016 primary despite being hyped for years as potential GOP nominees because of their potential to appeal to a broad swath of their party.

After all, Harris likely will be competing for attention with a lot of candidates. And if she doesn’t do well in one of the first two contests, in mostly white Iowa and mostly white New Hampshire, then I don’t think there is any guarantee African-American voters or even California voters will get behind her.

Each time a candidate declares, the conversation starts on whether or not they can rise from the primary fight victorious then unify the party to take down President Donald Trump. It seems many people on paper look able to do that second part of unifying the party, and hope to be able to defeat President Trump, but the question remains which one survives the first hurdle of the primary battle royal.

“That’s why I’m running for President of the United States. I’m running to lift those voices. To bring our voices together,” Senator Harris said in her announcement. Now we will see if the Senator can deliver on her years of “potential candidate” hype.