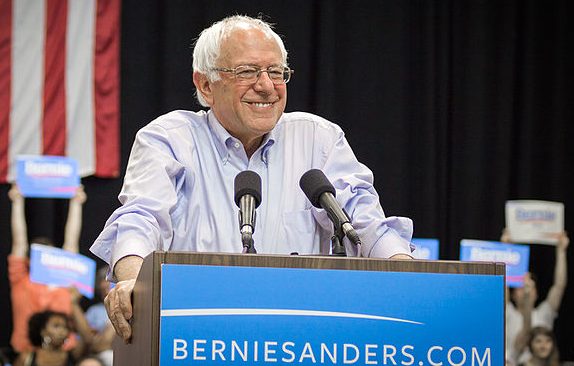 A recurrence of Feel the Bern?

Two sources with direct knowledge of his plans told Yahoo News that Sanders, an independent and self-described “democratic socialist,” plans to announce his presidential bid imminently. While Sanders has been mulling a bid for months, one of the sources said he was emboldened by early polls of the race that have consistently showed him as one of the top candidates in a crowded Democratic primary field.

In particular, the source said Sanders was heartened to see numbers indicating he is one of the leading candidates among African American and Latino voters, two groups he was perceived as struggling with in 2016.

The source also alluded to a spate of recent polls that show Sanders as the most popular politician in the country. They attributed Sanders’ strength in the polls to the base and name recognition he built with the prior presidential bid.
“What the senator has this time that he didn’t have last time is he is the most popular elected official in the country right now,” the source said. “That’s light years away from 2016 when very few people knew who he was.”

A third source said Sanders’ bid will begin with an exploratory committee. Sanders’ campaign did not immediately respond to a request for comment on this story.

In addition to these two sources, a former Sanders staffer who was not been briefed on the imminent announcement plans nevertheless said they were aware of many recent signs he is set to pull the trigger on a presidential campaign. Specifically, the former staffer said

Sanders has been building out the infrastructure he would need for a White House bid.

“He’s already talking to staff and there are people he’s hiring. They’re nailing down contracts with vendors, … all the movement is there for him to run,” the ex-staffer said.

Sen. Sanders, whose official social media still touts “U.S. Senator Bernie Sanders of Vermont is the longest-serving independent in congressional history,” has some unfinished 2016 business with some in the Democratic Party if he does indeed run:

But Sanders’ impact on the Democratic Party went beyond his political vision. The primary battle between Sanders and Clinton was contentious, with Sanders allies claiming Clinton’s campaign worked in conjunction with the Democratic Party establishment to prevent a Sanders victory. These battles cemented divisions in this party that linger on as the 2020 election approaches.

Following President Trump’s victory over Clinton in 2016, Sanders and his allies pressed for reforms to the Democratic National Committee that would make the party’s primary process more open and inclusive to what Sanders termed “the working people and young people of our country.”

Amid Sanders’ reform push, the DNC assembled a “unity commission” to recommend changes that included members chosen by both Sanders and Clinton. Ultimately, the DNC made rules changes that included one of the main items on Sanders’ agenda, curbing the role of unelected superdelegates in choosing the party’s presidential nominee. At the same time, the DNC also adopted a rules change that would make it more difficult for independents like Sanders to seek the party’s presidential nomination.

In spite of this, Sanders’ allies felt he was unaffected by this new rule because the Vermont Democratic Party passed a resolution last year recognizing him as a full member. A source who discussed Sanders’ 2020 plans with Yahoo News confirmed he will be running as a Democrat.

More importantly, though, might be the reopening of old wounds from the Democratic Party’s failure to defeat Donald Trump behind nominee Hillary Rodham Clinton in 2016. More than a few HRC supporters blame Sanders, and the rift between the party establishment and the progressive wing has been endlessly debated ever since. A quick look at social media and opinion writing will bring every opinion on Sanders from “He’s not even a Democrat!” to “He’s a messaging genius” to “We don’t need to nominate another old white dude.” The role of Bernie as symbol of the progressive wing of the Democratic party was thrown into sharp relief during the fall, when Sanders campaigned with one of his former 2016 field organizer around the country who has become a symbol herself, Alexandria Ocasio-Cortez:

Alexandria Ocasio-Cortez, the self-described Democratic socialist who was an organizer for Sen. Bernie Sanders’ 2016 campaign, isn’t endorsing her fellow socialist.

Sanders did not endorse Ocasio-Cortez in her stunning primary defeat in June of longtime Queens political boss Rep. Joe Crowley.
But since then, the two have joined forces to campaign for progressive candidates around the country.

Bernie Sanders may not get her endorsement, but his staffing efforts are including AOC’s media production team that helped propel the now-Representative of NY-14 to victory, and national attention. The 2016 Sanders campaign was run relatively lean on staffers and infrastructure, and social media and outreach will no doubt be vital to anything he hopes to accomplish in 2020. But the largest problem for Sanders might well be the absence of Hillary Rodham Clinton. There isn’t a firm metric on the number, but it’s a fair question to ask just how much of Bernie’s 2016 support came as the default alternative to the pre-selected nominee. Additionally, Sander’s more vocal supporters spend an inordinate amount of time attacking the party and party figures that they feel don’t rise to the standards of their favorite socialist. For a party desperately seeking a unity candidate to topple the Donald Trump presidency, many are asking if another cycle of party establishment vs Sanders supporters would be a fatal distraction to a Democratic Party nominee.

He was an undecorated independent senator from an extremely liberal state who only identified as a Democrat to run for president, and moreover described himself as a democratic socialist. Yet he forced the prematurely anointed Clinton, around whom the entire party establishment had coalesced years prior, to campaign like hell until the very end.

Nonetheless, for weeks now, outlets have been doubting the viability of a second Sanders bid for president. “Instead of expanding his nucleus of support, the fashion of most repeat candidates,” Jonathan Martin and Sydney Ember wrote in The New York Times, “the Vermont senator is struggling to retain even what he garnered two years ago, when he was far less of a political star than he is today.” By way of evidence, the article noted that some of Sanders’ supporters in Congress “won’t commit to backing him if he runs for president again—and two may join the 2020 race themselves. A handful of former aides might work for other candidates. And Bernie Sanders’s initial standing in Iowa polls is well below the 49.6 percent he captured in nearly defeating Hillary Clinton there in 2016.”
Get the latest from TNR. Sign up for the newsletter.

New York magazine’s Ed Kilgore gave several reasons Sanders “has lost his 2016 mojo,” including: his support was inflated by a thin field and resistance to a Clinton coronation; his policy positions have been co-opted by other Democrats who aspire to the presidency; he’s old; he’s a white man. “If Bernie Sanders has to fight to hold onto the mantle of progressive leadership, his time has surely past,” Kilgore wrote.

And on Monday, The Boston Globe noted Sanders’s declining support and waffling from many of his 2016 backers. “I’m torn … because I was in the midst of the campaign with Bernie, but I think the people who look at that campaign need to understand the context is different,” Jonathan Tsini, author of The Essential Bernie Sanders and His Vision for America told the Globe. Other 2016 backers have begged Sanders to back off, for reasons ranging from his age to the need for new blood to his importance in leading a democratic socialist movement.

Bernie Sanders’s biggest success came in being the alternative in a binary choice in 2016. His most popular, at least to his supporters, ideas are more widely accepted if not fully endorsed by other candidates. And he is no longer the only Democratic Socialist on the American political scene. In other words, with a very crowded field in 2020 Bernie Sanders has the same problem all the other aspiring candidates have: where does he fit in?

Challenger: Learning of Tragedy in Real TimeThe Kelli Ward Guide to Turning Red Into PurpleLinky Friday: Please Allow Me to Introduce Myself
[archive]
Please do be so kind as to share this post.