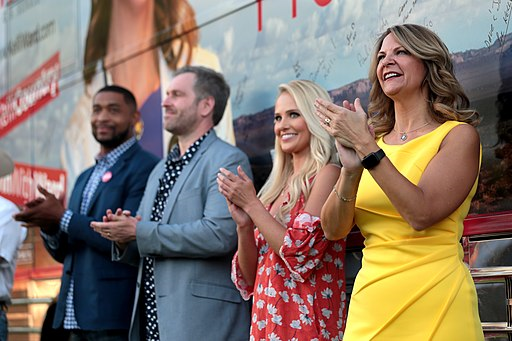 Kelli Ward finally found a state wide office she could get elected to, having been sworn-in as the new GOP Chairwoman for the State of Arizona. The twice-failed senate candidate has found herself a new role, and her vision for that role is clear:

Ward, 50, had argued that the state party needs an array of changes in the wake of a “crushing defeat” in the November general election that saw the loss of the Senate race and defeats in several other congressional and statewide races despite holding a voter registration edge over Democrats.

“We simply can’t afford to let this happen … we need to do better,” Ward told the party gathering Saturday, adding later: “We have to win 2020 for President Trump.”

Better? Um…Kelli Ward was crushingly defeated in the primary in 2018. 54% to her 27%. While Martha McSally went on to lose to Kyrsten Sinema by less than 3% in a banner cycle for Democrats, Arizona had a record number of Republican voters come out. Ward’s 2018 showing was even worse than the 51% to 39% drubbing the late John McCain chalked up in 2016. But the electoral failings are not even the beginning of the problems with letting Kelli Ward helm the state Republican Party.

Ward, who was a state senator from Lake Havasu City, has had a history of controversies since entering Arizona’s political scene.

In 2014, she hosted a meeting in Kingman to discuss concerns about “chemtrails,” the fringe conspiracy theory that airplanes are spraying dangerous chemicals into the air through their contrails. Ward said she never believed in “chemtrails” herself, but critics said she wasted taxpayer resources to pander to those who did. McCain’s 2016 campaign dubbed her “Chemtrail Kelli,” a term her campaign denounced as sexist.

As a Republican insurgent who took on McCain, the party’s 2008 presidential nominee, Ward became a favorite of conservative pundits such as Sean Hannity and Laura Ingraham. She also has had associations with controversial figures on the right, such as Paul Nehlen, a self-described “Pro-White” Wisconsin congressional candidate who was disavowed by the GOP, and conspiracy-theorist Alex Jones.

Oh, wait, there is more:

Despite an effort to appear more serious this time around, Ward again palled around with the likes of Jones and another conspiracy theorist and alt-right figure, Mike Cernovich. Her justifications were…interesting. “I think there’s an audience of people out there that do listen to Infowars, and should they be left in the dark about options that are out there?” she told the Weekly Standard. When Cernovich’s appearance and his Pizzagate advocacy became an issue a few weeks back, Ward at first claimed she wasn’t familiar with Cernovich’s views but then, shortly thereafter, suggested she knew plenty about his audience.

HUNT: “Mike Cernovich has been associated with the PizzaGate conspiracy theory that led to shots being fired at Comet Pizza here in Washington. Do you believe what has been said about Hillary Clinton and pizza and all of this nonsense that has been on the Internet?”
WARD: “All I know about Hillary Clinton is that she would have been a terrible president. She — and I’m so thankful every single day that she isn’t in the White House.”
…
HUNT: “So do you not want Mike Cernovich on your bus tour?”
WARD: “Mike Cernovich has an audience that we want to reach. And that includes Republicans, conservatives, liberals, Democrats, people of all ilks. And so, if he’s coming on the bus tour, I think that he’ll have a voice and he’ll have something that he wants to say.”

Ward’s 2018 campaign would ultimately end a lot like the 2016 version did: with a pretty obvious last-minute Hail Mary. When McCain announced he was going to stop treatment for brain cancer last week, Ward took to social media to suggest it might be timed to distract from her bus tour.

And then, when McCain actually did die shortly thereafter, Ward two days later again took to social media to suggest the real cancer was political correctness.

Candidates often toy with things like the idea that their opponents are too old and/or play footsie with conspiracy theories and extreme elements of their party. Where Ward differed was how absolutely ham-handed she went about all of that. Her campaigns often looked more like caricatures of what we’d expect from a tea party/alt-right primary challenger.

And now that person is setting the tone for a party that is looking at a Senate special election in 2020, a presidential election, and a US House delegation that almost went blue in 2018. Arizona has a Democratic Party that saw wins for secretary of state and state superintendent of public instruction in addition to their first US Senate seat in 30 years. Gov. Ducey won fairly comfortably, but President Trump only carried the state by less than 4%. The idea that there is a rabid base of hard right support for the party just waiting to be revealed and catered to is not borne out in the data.

More likely, traditionally red Arizona is going to start trending more purple, and will be a battleground state in 2020. Much may happen between now and then, but the president is not going to be gaining in popularity, and having a party head who has offered little more than MAGA talking points and controversy is not likely to stem that tide. Indeed, Kelli Ward is more likely to be last in a long line of bad decisions that caused the red dam to break. The Arizona GOP better pray the damage done is only confined to election results. Someone with Kelli Ward’s track record is very likely to do far more damage that just the loss of votes and the traditional fundraising base—who are already making noise about finding other places for their support. In answering allegations that during the election night parties Kelli Ward’s husband had an altercation with a former support who voted for Martha McSally, spokesman Zachery Henry cranked the hypocrisy meter to 11:

“If the (Arizona Republican Party) under (current chairman Jonathan) Lines wants to break the 11th Commandment, that’s on them,” referring to a phrase created under the California Republican Party that reads: “Thou shalt not speak ill of any fellow Republican.”

Michael Ward may well have not done it, but the response and pattern of behavior is a harbinger of what is to come with Kelli Ward leading the party. Every criticism of Ward personally will be defended as an attack on the whole of the Arizona GOP, and every questionable thing Ward does will be laid on the whole of the party. Expect plenty of defenses of “fake news” every time something negative comes out. In letting Ward carry their banner and be their public face, not only is the chance of major gaffes and errors high, but there will be no benefit of the doubt because of her long history of such things. Before Saturday she was a rejected candidate with problematic behavior and incidents dismissed as attributable only to her. On Sunday morning, she IS the Arizona GOP, as far as the wider public is concerned.

Everything in an organization rises and falls on leadership. Power has never, in the history of ever, increased a person’s chances of changing into something other than an amplified version of what they already are. It enables them to fully embrace and expose what they really desire to accomplish. With years of book on how Kelli Ward conducts herself, treats opponents, and the company she chooses to keep in seeking power, the Arizona GOP can say whatever they want when they look back on her tenure leading the party. What they cannot say is they didn’t know, or that they were not warned.

Challenger: Learning of Tragedy in Real TimeBernie Sanders Reportedly to Seek Democratic Nomination AgainLinky Friday: Please Allow Me to Introduce Myself
[archive]
Please do be so kind as to share this post.