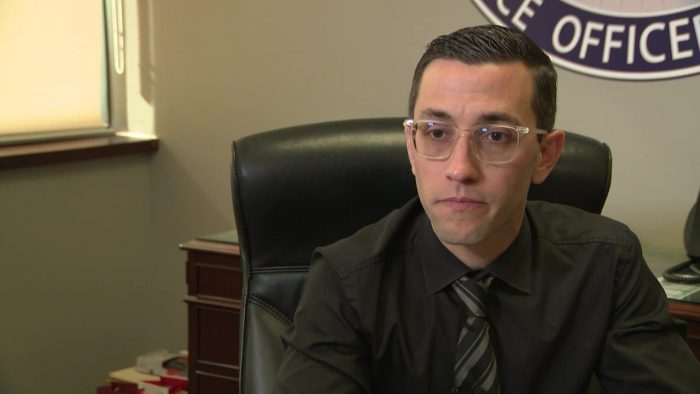 Joe Gamaldi was beyond excited. It was late January and five Houston police officers had been injured, four of them having been shot, after raiding a heroin dealer’s home in Houston. Gamaldi, the head of the Houston Police Department’s Union, knew exactly who he could blame: activists opposed to police violence. So after Houston’s Police Chief, Art Acevedo, had given a public briefing explaining what exactly had happened during the raid, Gamaldi stepped to mic and offered this:

And, in case that had not been clear enough, he offered this too:

“If you’re the ones that are out there spreading the rhetoric that police officers are the enemy, just know we’ve all got your number now, we’re going to be keeping track of all of y’all, and we’re going to make sure that we hold you accountable every time you stir the pot on our police officers. We’ve had enough, folks. We’re out there doing our jobs every day, putting our lives on the line for our families.”

Gamaldi followed those comments up by insisting that there was a war on cops being waged nationwide – something that statistics absolutely do not show and something that is plainly untrue – to ludicrously insist that police only use force when it is justified:

“It could be the activists in recent years that decided they want to stir up every single use-of-force incident, even though it’s overwhelmingly justified in every single case,”

Gamaldi took his outrageous claims to anybody who was willing to give him the opportunity to hype them, which meant Fox News and social media:

Excellent Statement on FOX NEWD Joe. All factual points. It’s time all police unions stand together and push back against the lies being cast upon the working men & women in law enforcement, COPS ARE THE GOOD GUYS https://t.co/DAViHFGyQ7

Cops care deeply for the communities they bravely protect. They often risk it all to fight crime & disorder. We saw it last night in Houston, and across America over this first month of 2019. @HPOUTX President @JoeGamaldi speaks out. pic.twitter.com/0Lk9M8Q4rk

Acevedo had balked at Gamaldi’s comments and did what he could to undo the union boss’s claims. Acevedo said that those critical of police had nothing to do with what had happened during the raid. Acevedo insisted that they were two entirely unrelated things and that conflating the two would do nothing to improve the broader cultural moment between police departments and the communities they police. But Gamaldi was so confident that he was in the right – so certain that nothing could possibly undo his version of the narrative – that he went after Acevedo too.

I was just at City Council defending @houstonpolice budget, while doing so, I was told I was being thrown under the bus at a news conference. Sad state of affairs when defending reputation of the brave men and women of law enforcement is frowned upon by a few. #EnoughIsEnough

Joe Gamaldi stayed tweeting and talking about the shooting before suddenly going silent. Because the raid, initially presented as an open and shut case of heroic police taking down heroin dealers, suddenly became something else altogether.

The Raid and Its Aftermath

In early January 2019, the Houston Police Department was alerted, anonymously, to the possibility that Dennis Tuttle and Rhogena Nicholas were dealing heroin from their home in southeast Houston. The department surveilled the house for the next several weeks, and after a confidential informant purchased heroin at the location on January 27 – reportedly having seen both the makings of a heroin distribution operation as well as handguns – the HPD decided to serve a search warrant. Plainclothes officers initiated what is known as a no-knock raid at 5:00pm, kicking in the home’s front door, immediately killing a dog that confronted them, and exchanging gunfire with Tuttle. By the end of the raid, both Tuttle and Nicholas were dead. Five officers were injured, four them having been shot.

Acevedo initially claimed, in the aftermath of the shooting, that officers at the home had recovered heroin, cocaine, marijuana, and guns. While Gamaldi was busy implying that anti-violence advocates had been responsible for the shooting, Acevedo seemed to be making a genuine effort to be as transparent as he could. He described the raid’s outcome as an extreme outlier, noting that the HPD executes hundreds of no-knock raids and that this was the only one that had ended in this sort of violence.

A few days later, Acevedo’s story was still evolving; his officers had recovered marijuana, a “white powder,” three shotguns, and two rifles but no heroin and no handguns. There was no evidence of the reported drug-dealing operation. And far from a couple of Scarface wannabes, Tuttle and Nicholas were liked by their neighbors, had a single charge of passing a bad check between the two of them, and were genuinely thought of as quiet, friendly folks.

There was a good reason why what officers found did not match, in even the slightest, what the confidential informant had initially reported: there had been no confidential informant. The officer in charge of the investigation, Gerald Goines, had claimed that he watched a confidential informant enter the house, purchase heroin, and leave. From his hospital bed – Goines had been one of the officers shot during the raid – Goines offered investigators two possible names for the confidential informant used in the buy; it was not clear why he would not have the name of the single informant. But officers dutifully tracked down both individuals anyway. Both of them, when questioned by the police, acknowledged having worked with Goines in the past, but both disputed ever having done anything at Tuttle’s and Nicholas’s home. There had been no controlled buy, in other words, which meant that there was no observed heroin dealing operation, which explains why investigators found nothing that matched what had originally appeared in the affidavit that justified the warrant Goines had secured.

Goines, it should be noted, was routinely praised in performance reviews despite a long history of allegations made about his behavior. Now, his previous casework is coming up for reconsideration, with prosecutors acknowledging the possibility that if Goines was willing to lie to get at Tuttle and Nicholas, he might have been willing to do so elsewhere. The case has spun so wildly out of control that the FBI is now involved. Goines, who remains hospitalized, is likely to face murder charges as soon as he gets released, at least if Acevedo has his way.

And Gamaldi? In the aftermath of the whirlwind of revelations about Tuttle and Nicholas, about Goines, and about an open and shut case that was anything but, he offered the following statement:

I want to publicly apologize, both to Dennis Tuttle and Rhoghena Nicholas – whom I wrongly  described as dirtbags despite it now being clear that they were each victims of a police department run amok – and to the activists I slandered and threatened as having wanted this kind of violence. I believe deeply in police, and it never occurred to me that one of our own could have acted in such a flagrantly illegal manner. Those activitsts are right to distrust police and my commentary only made a bad situation much worse. I endeavour to do better by the people who live in the communities that I police, to listen rather than accuse, to emphathize with rather than threaten, and to make a genuine attempt to be the officer that I thought I was. These folks are owed at least this much.

Nah, just kidding. Gamaldi said nothing of the sort, instead he chose to double – or was it triple? – down on his unbelievably transparent nonsense. He tried the following claim:

“If these allegations are true, it is certainly concerning and disturbing…but I want the public to know this does not reflect the hard work of the men and women of the Houston police department.”

Acevedo echoed Gamaldi on that, insisting that it would be unfair to draw conclusions about an entire group of people based upon the actions of a few, a standard which sounds awfully familiar. Meanwhile, only the most advanced of philosophers working today can fully suss out how it is that an officer who works for the Houston Police Department is not a reflection of that same police department. But Gamaldi went further because why stop digging once the work is begun?

“Obviously, the accusations are very, very serious and it is very, very disturbing, but it is not a reflection of the 5,200 brave men and women of the Houston Police Department who go out there and earn the trust of the community every time they interact with them,”

One wonders if it has ever dawned on Gamaldi that one of the reasons Houston’s community might not trust its police department is specifically because of officers like Gerald Goines: repeatedly sanctioned for his violent outbursts, repeatedly dinged for his sloppy paperwork, revealed as the conspirator behind a police raid that left two innocent people dead, repeatedly praised by his supervisory staff, and publicly defended by the likes of Joe Gamaldi before offering such a defense became absolutely untenable. But of course, that would require Gamaldi acknowledging the possibility that the HPD’s critics – the ones he threatened less than a month ago – might be right.

John Engler Cannot Get Enough Feet Into His Own MouthCongresswoman Says Bad Word, Conservatives Feign OutrageTwo Reviews Of “Spider-Man: Into The Spider-Verse”
[archive]
Please do be so kind as to share this post.