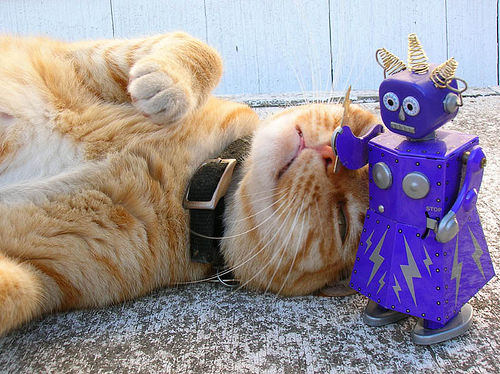 When multimillionaire fashion designer Karl Lagerfeld died Tuesday at the age of 85, speculation swirled over one thing.

Choupette, Lagerfeld’s cat, is Internet famous in her own right and is likely to inherit at least some of his millions.

Choupette is a pretty cute cat.  Would pet, if she’d have me.

I like cats. I have, and have had, a lot of pets over the years, from hermit crabs to golden labs. But cats are without question, my faves. Cats are curious pets, though, because you really have to work at them. They aren’t like dogs, who are usually falling all over themselves…and often peeing all over themselves as well…to love you even if you’re busy doing something else at the time. Cats don’t roll that way. Cats must be charmed and enticed. And if you happen to pick out a kitten who was totally adorable, but matures into a cat who just really isn’t that into you, you may find yourself servant to a furry tyrant who doesn’t even have the decency to sit on your lap and purr now and then.

Another thing that’s been much in the news of late is sex robots. Are they ethical?  Do they dehumanize women? Will they rise up and kill us all?

None of this is very interesting to me because I am 110% certain that I will never own a sex robot, not even if they make a model that looks exactly like James Garner. But a robot cat, on the other hand – I wonder.

It isn’t hard to imagine the appeal of a cat that didn’t scratch at the furniture, didn’t require Fancy Feast, didn’t shed, didn’t need a litter box, didn’t make me sneeze, and was always up for a cuddle. I literally just tried to pet my cat this very moment and she latched onto my arm with her front paws so she could simultaneously bite my hand whilst kicking my wrist viciously with her heavily-beclawed hind legs. She just wasn’t in the mood for my tender ministrations right then, which I accept because she’s a living creature with her own agenda and regardless of how much I wuvs her, right then she was trying to have a bath. Would a robot cat be better? The answer is, probably – if only for the practical reasons – no shedding, no pooping, no sneezing. But the deeper question for me is the purring. Would the constant accessibility of a robot cat outweigh the fact that it wasn’t real?

I’m inclined to think it wouldn’t. I suspect that a robot cat might be enjoyable, but unsatisfying, like dining on marshmallow Peeps. Too easy. I’d still want the real thing. There’s something about the challenge of winning a kitty’s affection that is supremely rewarding, and if it came merely because I’d programmed an entity to like me, well, I’m not so sure that would do it for me.

An episode of Buffy The Vampire Slayer centers around this concept.  A guy builds himself a robot girlfriend only to realize he prefers the real thing, and then the question becomes what does a guy do with a robot he doesn’t want any more?  Especially when it’s programmed to love him and only him?  Hijinks ensue, and the moral of the story is that making someone like you against their will (or in absence of any will at all) is like winning by cheating. Even if you get away with it, you know in your heart it’s not the real deal.

Clever programmers would undoubtedly figure this out and would write code to ensure robot cats acted believably catty. You’d have to earn their trust and their love, probably by spending a certain number of hours spend dangling yarn for Robokitty to bat at, and serving up X-number of bowls of digital cream. With trial and error, in time this algorithm would eventually produce a robot cat that was pretty close to the real thing, only without all the hairballs. This could be a happy development for people who are unable for whatever reason to care for a real cat.  Yet I remain unconvinced it would feel the same emotionally as an actual feline companion.  It would definitely be better for the environment, as housecats are pretty destructive critters. But would robot cats ever fully usurp the place of real cats in people’s homes and hearts?

I think not. Humans are attracted to life experiences like cats to catnip. When presented with two nearly identical options, most humans try to find a way to have them both, and ten other things besides. So I suspect that while people will eventually embrace robot pets, they’ll do it alongside flesh-and-bone pets, not instead of. I even suspect people will prefer it if their robot pets don’t look TOO much like the real thing because we want to enjoy the “having a robot” right alongside the “having a cat” thing.  We’ve already played with this idea with Furby

AIBO is Back – The Original Cute Robot Dog from Sony

These things look nothing like actual pets, and we like it that way. If I had to make a prediction, I’d bet large sums of money that the future market for robotic pets that look nothing like actual animals will far exceed the market for animal doppelgangers.  If anyone out there is investing in sexbots thinking to make a lot of money, I suggest taking a hard look at robot Pokemon instead.

Adorable. And yet if you watch that commercial, you’ll see one of the selling points is “it acts against you”! Robot Pikachu gets angry, shakes its head, and refuses your requests – and we like it! If we could make that little yellow guy administer electric shocks like a good Pikachu should, we’d love it even more. Sales of rubber gloves would skyrocket.

We WANT our pets, even our robotic ones, to have a rebellious streak.

It may be at some point in the future, that programmers will get the robot cat entirely figured out. They’ll give us a cat that looks like Choupette and acts like Choupette, only without the downsides that come with Choupette. Your forearms will stay entirely unscarred, your sweaters unsnagged, your floors hairball-free. No one will sneeze and your couch will retain its youthful beauty.

And I would bet that these kittens will be insanely popular.  But they’ll never take the place of the real thing.

Because humans, just like Pokemon trainers, gotta catch ’em all.

Feminism, Lost in SpaceAshes in the WindFamiliar in a Strange Land
[archive]
Please do be so kind as to share this post.