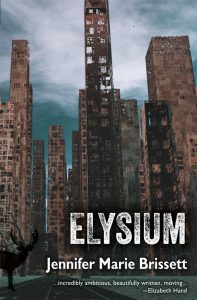 I bought Jennifer Marie Brissett‘s Elysium as a download for my Kindle on a lark early this week. It came up under the category of “readers who enjoyed Neal Stephenson also bought…” in the Amazon recommendations list.

Maybe that’s fair, but Elysium, unlike Stephenson’s oeuvre, is not the thrill of seeing new possibilities in the technologies, economics, or knowledge that make up (or might one day make up) what humanity calls “progress.” So although there is a futuristic setting and casual reference to advanced technologies, these are very much incidental to the story. Brissett explores something altogether different.

Initially set in a seemingly contemporary, English-speaking, multicultural metropolis (implied but never explicitly stated to be New York), the book for the first several chapters seems naught save a series of vignettes of the inhabitants’ love lives, albeit interrupted by bizarre incongruities. A skyborne spot of green light, a wandering elk, bursts of computer code, an owl on the hunt, and a sorrowful gathering of friends and lovers, are but some elements within a panoply of leitmotifs persisting across the novel’s repeated narrative dissonances.

Soon, it becomes apparent that the book is about a love shared by a collection of souls. They struggle to find love, hold on to love, and cope with mourning lost love. Although the lives of the several characters seem different, maybe these are really the same souls, seen over and over again, diffracted each time as through seen through different facets of a prism. They do it across a series of shifting landscapes melding the mystical and the technological, the future with the past, the possible with the mundane.

Part David Mitchell, to be sure, but also part William Gibson, part H.G. Wells, part Percy Shelley, and part M. Night Shayamalan, Elysium eventually finds its own resting place somewhere in suspense between some of the signature concepts which each of these artists most famously expounded. Brissett wryly manipulates the reader’s social expectations in the cast of her characters and the framing of the weirdly shifting settings upon which her characters play and replay permutations of their tragedy. Her focus is not where you think it will be: like a good mystery author, she’s always a step ahead of you until the very end, when she lays her truth plain. 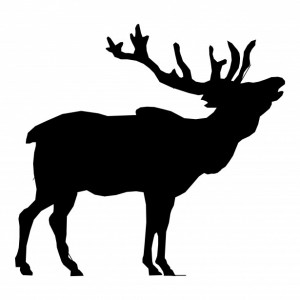 About halfway through the novel, the basic device by which the story is framed becomes revealed, but the search for explanation and understanding continues notwithstanding: the story is not about some technological creation, it is about people. The ultimate and ancient (I hesitate to say eternal) nature of the story lies hidden in plain sight for virtually the entire novel. It is a pleasant if poignant reveal, a story that perhaps is more historical than timeless, yet one which leaves the reader asking how in that position they would have acted differently.

The story ultimately ends on a cold but morally ambiguous note, leaving the reader to ponder the protagonist’s motive for the final step in the drama, and what that motivation says about what lies at the core of people loving one another. I should be grateful for others to read the book and discuss their interpretation of the ending here.

This was a decidedly strange read, one that I found myself wrestling with as I went along. There is some explicit sex, which may be off-putting to some, but which well serves the purposes of the story rather than mere prurience: some love has a sexual dimension and some does not. Bissett feels no need to adhere to what seems to be the emerging, cinematically driven, nigh populist imperative to resolve each chapter on a tense cliffhanger. There is nevertheless a propulsive force to the narrative that, in retrospect, is assisted by the incongruities and dissonances in the setting and character shifts, rather than hampered by them things.

Despite the disquiet that the shifting narrative patterns left in their wake, I inhaled the entire novel in only two days. That may be the strongest endorsement I can make of the book: like falling in love, it leaves you with an insatiable hunger for more of itself, and a sad fulfillment when it ends, as it inevitably must.

Image Sources: public domain, from the reviewed book under claim of fair use.