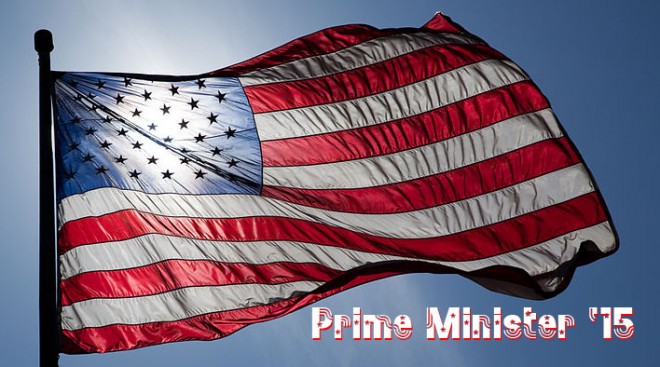 Elections are fun. Let’s have one!

Who would we elect to run the country, if given the choice? That’s what we’re hopefully going to find out! We’re going to hold an election. I want to avoid certain kinds of strategic voting like “Who is going to keep the Republican congress in check”, which is why we are going to be electing a prime minister instead of a president. There will be no electoral college, and we’re not going to worry about the current party structures. There are going to be five or six parties that will be determined after this phase, followed by primaries/conventions and a general election with IRV ballots (sort of).

You do not need to be an American citizen to participate, though the more you know about American government, the better.

There will be three phases. This one is the first. Let’s start nominating candidates. In your heart of hearts, who would you like to see as our national leader? Not every nomination will become a candidacy, but I plan to be pretty responsive. You can help your candidate’s case by expressing in a single paragraph why you think they would be a great prime minister (which I may use later during the convention/primary and perhaps general election phase). If you have more than one, go ahead and list them. However, I ask that you put one name in bold or in a line by itself, so it’ll be easier for me to collect them. The only rule here is that they cannot be a current or former president.

Once the nominations are in, I will organize them in to five or six parties. Most likely it’s going to look like: left (“Greens”), center-left party (“Social Democrats”), centrist or crossover party (“National”), conservative party (“Conservative”), and libertarian party (“Liberty”). But I will adapt the parties to fit personnel, if the distribution looks different (though I can’t change the names – or at least the initials – of them).

The second round will be the primaries/conventions. Though the parties don’t exist one, you will defacto join one when you vote in the second round. It will be an open primary and you can vote for any candidate in any party.

The last round will be the election itself. You are not beholden to vote for the nominee of whichever party you voted for in the last one. It will be an Instant Runoff Vote ballot. Since this is a parliamentary system, you are encouraged to vote your conscience and not “strategically” (as votes will help your preferred candidates party in parliamentary allotment), and because of the structure there is no cost of doing so. The way that the final votes will be calculated will not be strictly IRV, however. The short explanation is that it will be done by slate. That is to say that if Party X loses and its votes are redistributed, all of the votes will be redistributed towards whichever remaining party has the most second-spot votes for that candidate. The 2-5th place selections are basically directives to the candidate on who they should coalition with, and who should be prime minister.

An example of what I mean by that is that if Tom, Judy, and Jill vote for Ralph Nader and Tom and Judy put Al Gore down as their second choice and Jill puts John McCain down, all three “secondary” votes will go to Gore’s party, because it means that Nader’s party is going to coalition with Gore’s. Make sense?

I hope I have explained this well, and I will try to clarify if I have not. So… who do you want to be our prime minister?