I fully expect to see the National League adopt the designated hitter (DH) rule within my lifetime, and I am no longer young. This prediction brings me no joy. I have been a National League guy most of my life, and prefer the traditional rule of the pitcher batting. I am not writing, however, to argue this. You either know the arguments by heart by now, or don’t care. My subject is why the rule has become inevitable.

The DH was introduced to the American League in 1973 in response to a period of historically low offense. The idea was to remove the worst hitter from the lineup and put in some guy who can actually swing a bat. This was a valid point, but irrelevant to later discussions. The National League worked things out without the DH, and level of offense has nothing to do with the subsequent and continuing spread of the rule.

Peter Ueberroth, coming off successfully organizing the Los Angeles Olympic games, was made Commissioner of Baseball in 1984. One of this goals was to reunify the rules. This went nowhere with the owners, and the idea was quietly dropped. The discussion stands out today in that it was open about which way the rules would go. Ueberroth was agnostic about whether the DH should be adopted by the NL or abandoned by the AL. It was possible in 1984 to think of the DH as an experiment that had been given a fair chance, but which had run its course. This is inconceivable today. No one seriously, and few even frivolously, would suggest that the AL abandon the DH. What has changed?

Partly it is the passage of time. In 1984 the DH was still a newish rule. Most AL fans had grown up without it. The DH was regarded as varying from the norm. Now the DH is the norm. League after league has adopted it. Every league on every level above Little League uses the DH today, with just two exceptions: the National League and Japan’s Central League. (In the high minors, the DH is waived when both teams are NL affiliates.) Many fans have never known any other way. Today it is the NL with its eccentric rule that stands outside the norm.

This just begs the question, in the petitio principii sense of the expression. Why did the greater baseball world collectively decide that the DH is normal baseball? I wondered about this for years, in a vague sort of way, until I recently saw this chart from Beyond the Box Score, leading to a Eureka! moment where It All Became Clear: 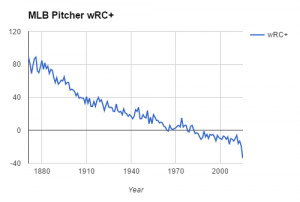 This shows the historic decline of batting by pitchers. If you are not an advanced baseball stats geek, your eyes likely have glazed over at the sight of “wRC+.”  This is one of those jargony names so beloved of stats geeks. It stands for “Weighted Runs Created Plus.” That doesn’t help much, but don’t worry about it. If you want the gory details, you can read them at http://www.fangraphs.com/library/offense/wrc/ but I don’t really recommend this. All you need to know is that it is an omnibus stat accounting for, in theory, a player’s total contribution to runs scored, with the average player set at 100.

Even that is more than you really need to know for this discussion. The important thing is not that pitchers, as a group, are bad at batting. It is that they have been getting steadily worse from the 1880s on, and weren’t good even then. This is what produced the ‘aha!’ moment. The low offenses of the late 1960s were the trigger that caused the DH, but the underlying precondition was that the baseball world collectively had long since given up on pitchers at the plate.

I had known that pitchers were getting worse at the plate, but I had not realized how long this had been going on. I had supposed that this was an effect of the DH. NL pitchers come to the league with but little experience batting–none, if they come from the AL. Furthermore, between the five man rotation and increased role of relievers, even starters get fewer plate appearances than in former times. So it didn’t surprise me that NL pitchers today don’t bat as well as they did forty years ago. What surprised me was to learn that pitchers of forty years ago were substantially worse batters than those of forty years before that, and that declining offense wasn’t new even then. The DH rule was the external manifestation of the internal acceptance of the irrelevance of pitchers at bat. Once a major league set the precedent, leagues lower down the pyramid felt free to acquiesce to this trend.

This merely pushes the question back a step. Why did baseball collectively and increasingly give up on pitchers at bat? Pitchers were already unimpressive at the plate in 1880. Candy Cummings probably didn’t invent the curve ball, but he has a reasonable claim from his professional debut in 1872 of being the first soft-hitting pitcher. They have been getting worse ever since.

What we have here is increasing hyper-specialization. It is not a law of nature. It is a decision. On the youth level, pitchers often are their teams’ best hitters, relying on natural athleticism. As they advance, training gets more serious and more specialized. In the most extreme version, the pitcher gets no batting training at all. Presumably the reason for this is that every minute spent training to hit is a minute not spent training to pitch, and is regarded as time wasted. The poster child for such specialization is none other than Babe Ruth. He was a very good pitcher, and had the stuff to be a great one. But early in his career he abandoned the mound and specialized in batting. It was understood that he had to choose one or the other. (This also, incidentally, serves as the response to anyone who claims that Barry Bonds was the greater player. Don’t waste your time talking about steroids. Ask about his ERA.)

Pitching is unique in this respect. Every non-pitcher faced an expectation of both hitting and fielding his position. (At least this was the case before the DH allowed for the pure hitter.) Probably the position with the lowest expectation of effective batting is the backup catcher. The prototypical backup catcher isn’t the backup because of his catching, but because he can’t hit. But even these guys have some expectations. Backup catchers aren’t precisely fungible, but they are pretty close. If a guy is a complete black hole in the roster, the team can go find someone who can hit at least .200. (As I was writing this, I became curious for some specifics, and did a back-of-the-envelope calculation. I took the average of the batting averages of all thirty MLB number to catchers for 2014. It came out to .229.)

While every position is somewhat specialized, only the pitchers are off the hook offensively. This in turn is an assessment of strategic priorities. It is cost-benefit analysis, judging that the loss of offense incurred by having the no-hit pitcher in the lineup is more than offset by the better pitching he derives by not being distracted by being expected to hit effectively.

This assessment, in turn (and regardless of whether or not it is correct) explains the progressive decline in pitchers’ offensive production. The history of baseball is of ever-increasing competitiveness. Play today is more competitive than back in the day–whenever that was–and back in the day it was better in the day before that. Today’s pitcher doesn’t have the luxury of facing a lineup consisting of a bunch of no-names plus two or three guys he has to worry about. Increasing hyper-specialization is one response.

This is not a trend that is going to reverse. The eternal battle between pitcher and batter is going to continue, and both sides are going to look for any edge they can get. To abandon the DH today would constitute unilateral disarmament. It ain’t gonna happen. NL pitchers are going to only get worse at the plate, and so it is inevitable that the DH’s opponents will finally submit to the inevitable.

41 thoughts on “The Inevitability of the Designated Hitter”