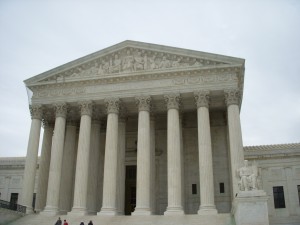 We are on track for the busiest June in the Supreme Court’s history. So far this month, the High Court has issued nine opinions, which would normally be on the low side of the range Court watchers would declare typical and expected. However, there are still seventeen more cases on the docket. What’s more, the 2014-2015 Term is scheduled to end on June 29, two weeks from today. Spare a thought to the thirty or so law clerks working massive amounts of overtime to get all of these opinions cranked out over the next two weeks.

No major cases released today, contrary to my expectations — I’d expected either Reed or Walker, or both, to be decided today.

But perhaps predictably, an additional release dates on Thursday has been added. Don’t be surprised if we get another additional date next Thursday with so many cases coming down the pipeline. On my watch list are:

I’m not likely to digest or report much on the remaining twelve cases, although of course at the Supreme Court level, there are no small cases. That’s more a matter of what I think will be interesting to write about in this forum than anything else.

Also, the result in Arizona State Legislature v. Arizona Independent Redistricting Commission will be important to the structure of politics in the next fifteen years, because it will decide whether or not independent commissions can be empowered by citizen initiative to draw Congressional election district boundary lines in an effort to curtail partisan gerrymandering. The methodology of getting to the result, though, is almost certain to be turgid and ultimately of less interest than the conclusion.

So while I might note the results in those two cases, I’m unlikely to do a digest of them. Other Court watchers, of course, should feel free to offer their own digests and analyses. As for today, SCOTUS released no significant opinions on my “watch list” and I’ll have to check back again Thursday morning. The Nine are the masters of their own calendar.

4 thoughts on “Nine Down, Seventeen To Go”