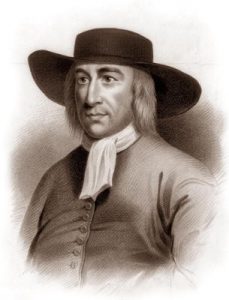 The relationship of the Quakers to the American Founding is fascinating. On the one hand, one might conclude the Founders had a strong dislike for them because of their refusal to take up arms. But they didn’t. Hey, many of the most important Founders were Anglicans whose “sect” officially stood for the very propositions against which they rebelled. Irony abounds in the study of religion and the American Founding.

Why might the Founders feel affection for the Quakers? There was a radically decentralized, highly individualistic, anti-creedal, anti-clerical element of the Quakers that resonated with the Whig Zeitgeist. And for those Founders who believed government didn’t need to support “true religion,” the Quakers had that too. As Ben Franklin explains:

If Christian Preachers had continued to teach as Christ and his Apostles did, without Salaries, and as the Quakers now do, I imagine Tests would never have existed; for I think they were invented, not so much to secure Religion itself, as the Emoluments of it.

When a Religion is good, I conceive that it will support itself; and, when it cannot support itself, and God does not take care to support, so that its Professors are oblig’d to call for the help of the Civil Power, it is a sign, I apprehend, of its being a bad one.

Note Franklin’s letter (October 9, 1780) was to the Arian Richard Price, who because of his Arianism would have flunked those religious tests the two of them complained about. Insofar as I understand the relationship of “Quaker doctrine” to the Trinity, their official doctrine is there is no doctrine.

Quakers of that time tended to believe in the Trinity but had no internal “confession” for it because they had no creeds. If the Spirit instructed the believer the Trinity existed, that was sufficient. If not, that was okay as well.  The individual believer, exercising his privilege as a Priest would decide for himself.

10 thoughts on “Ben Franklin on the Quakers & Lack of Need For Govt. Support of Religion, Etc.”