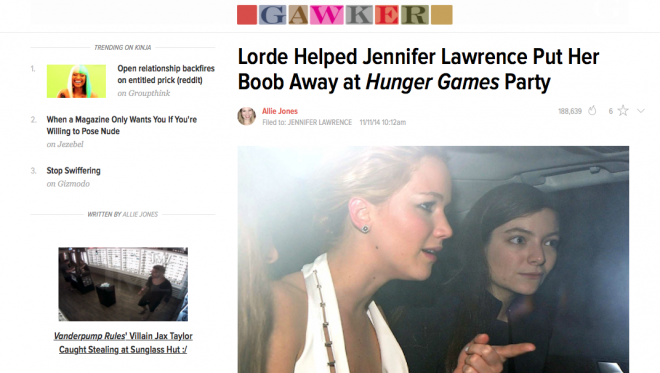 This might well be simply a generational thing; it might likewise be an internet thing. Either way, I think it’s entirely likely that most people here will respond to this post with a either a friendly “Get Off My Lawn” reference or a not-so-friendly bit of sneer toward me. Still, I really feel compelled to say this: The lack of professionalism I sometimes see in our New & Improved Journalism is truly gobsmacking.

This morning Tommy Craggs, Gawker’s Executive Editor, and Max Read, its Editor-In-Cheif, resigned from the Internet news site in protest over their board voting to pull a exposé story about the CFO for a New York-based media company.[1]

The drill-down details of this story aren’t germane to this post, but a general thumbnail of it probably is: The CFO reported on in the story, a man who is married (traditionally so) with children, contacted a male escort with the intention of engaging him. He backed out prior to meeting the escort, though he did still pay the escort in full. The escort, in return, extorted the CFO by stating that if the CFO did not use his influence to intervene in a housing dispute in which the escort was involved, he would go to the press and disclose the CFO’s hidden sexual orientation. When the CFO refused, the escort went to Gawker. Gawker, being Gawker, chose to run the story that a NYC-based CFO liked to have sex with men. Many who read the piece were understandably disgusted, both by Gawker’s knowingly assisting in the extortion and by the fact that Gawker thought that a non-public figure being gay and in the closet was news that needed to be published. Advertisers threatened to leave and so Gawker’s board of directors, determining that the bad publicity and loss of revenue was not worth the page clicks, pulled the story and issued an apology. Hence Craggs’ and Read’s departure, which they claimed their “journalistic integrity” demanded.

Up to this point in the story, it’s pretty impossible to find a hero. There are victims, sure — the CFO, his wife, and his children have nothing but my sympathy and empathy and I wish them all luck getting through this as unscathed as possible. But heroes? Not a one in sight. Certainly not the escort who extorted a man who answered his ad, nor the Gawker reporter who decided to write such a story about a non-public figure. Absolutely not Craggs or Read, who cannot have been unaware of the ethical principles they were trash-canning in exchange for what could not have been that many anticipated page clicks, considering the CFO wasn’t a very well-known figure. And don’t even talk to me about Gawker’s board of directors, who happily steered the damn site all the way up to this point, and who seemed cool with the scoop up until advertisers started threatening to leave.

But still, despite the total lack of hero I was not at a point of true despair about the state of electronic journalism until I read the memo Craggs sent out to Gawker staff upon his resignation. Because it’s one thing to realize that the person running one of the biggest and most influential internet news sites on the internet has zero scruples. It’s quite another to realize that he has the maturity level of a twelve-year old.

Leaving aside the question of whether or not outing a non-public figure for page clicks allows one the moral standing to cry “journalistic integrity,” there a million ways that Craggs could have communicated his exit and his displeasure with the board’s decision that would have also communicated the level of professionalism one should expect from an Executive Editor from a company as large as Gawker. Against all odds, however, Craggs somehow managed to miss all of those ways, and instead produced a document that is stunningly immature.

He discloses professional disparagement from a board member toward a staff member, apparently said in confidence, that seems to have no relevance to the issues at hand. He cuts and pastes text messages between himself an a board member, seemingly to boast how openly snide he was with his superiors even before the board pulled the story. He complains that the board voted without him there right after he brags about how he refused to go when requested.  He appears to try to foster antipathy between various board members against one another, and he seems to encourage the employees he is leaving not to leave, so much as to stay and be terrible employees. He refers to himself and those still loyal to him as “prodigies of journalism.” He talks as if the decision to pull the CFO story — “collusion” is the word he uses — was a conspiracy aimed at him. And he tells employees about how he passed a note to one of the board members in health class and said he was going to kick his ass at the tetherball court as soon as school was over, but the board member was so chicken he never showed up.[2]

And as depressing as all of that is, what I find more depressing is this: Wherever I see this story covered on the intertubes (everywhere), no one seems to find the memo noteworthy. I see people take sides over the issue of the post that got removed, and I can’t swing a cat without it being choked on comments about Craggs’ and Read’s actual exit. But I have yet to come across anyone who treats the content of the Craggs memo as anything but ordinary fare. The vibe I’m getting is that while the exit was eyebrow raising, the memo is just a memo, like people in media companies get all the time. And that is something that truly makes me despair.

Good lord, is it just Gawker — or all of our media companies run by children?

[1] Because of the nature of the story, I am choosing not to publish either the name of the CFO or the name of his company. The CFO is evidently somewhat press- and limelight-shy and decidedly not a public figure; aside from this story there’s not much at all about him online.

47 thoughts on “Fox News, I owe you an apology. It turns out you’re not even close to the worst large media company today.”