The health care debate is ramping up.  We now have a bill going forward in the Senate and one in the House, and pretty soon the twain shall meet.  In the midst of all of this, Senator Ron Wyden is finally coming out swinging. In fact, he has a very smart, very important piece out in the New York Times today which I’d like to excerpt (skip ahead if you want, it’s a long excerpt):

I believe there is a way to work with the present employer-based system to guarantee that all Americans have choices, and I am proposing it in an amendment to the latest Senate health care bill. My amendment, called Free Choice, would let everyone choose his health insurance plan.

It would impose only one requirement on employers — that they offer their employees a choice of at least two insurance plans, one of them a low-cost, high-value plan. Employers could meet this requirement by offering their own choices. Or they could let their employees choose either the company plan or a voucher that could be used to buy a plan on the exchange. They could also simply insure all of their employees though the exchange, at a discounted rate.

All payments that employers would make, whether in the form of premiums or vouchers, would remain tax-deductible as a business expense. Reinsurance and risk adjustment mechanisms already in the bill would balance the costs of employers who end up with disproportionately sick pools of workers, and this would avoid any disruption to existing employer coverage. Any employers that did not offer either their own choices or insurance through the exchange would be required to pay a “fair share” fee to help support the system.

My plan would actually strengthen the employer-based system by making it possible for even more employers to afford coverage than can today. Employers who offer high-quality health insurance to attract first-rate employees could continue to do so. And employees who like the coverage they have could keep it. Those who don’t, however, would be able to shop elsewhere.

According to one estimate, injecting this kind of competition into the employer-based system would save people and businesses more than $360 billion over 10 years. At the same time, it would improve the quality of health care.

Americans could take advantage of this change, or ignore it if they like; it would not be forced on them by government mandate. Ultimately, by empowering people to select the health insurance that makes the most sense for them and their family, we could end up with a system that works better for everyone.

Turns out, also, that the President has recently met with Senator Rockefeller and with Senators Bennett and Wyden at the Whitehouse, which may be a good sign that the President is taking seriously – if not their bill – then at least Wyden’s Free Choice Proposal which he’d like to add to the  Senate bill.  This is a good idea, even though the CBO has given the current Baucus proposal a pass, and Stan Collender thinks it’s fiscally sound.  Wyden’s proposal would help make it even more fiscally sound, not just for the government, but for consumers of health care.

Ezra Klein discusses the five things he’d do to change the Baucus bill – and I pretty much agree with each of them:

1) Kill the “free rider” provision. Kill it now. The employer mandate in the HELP bill raises more money and hurts fewer people. If that’s too onerous, then you can lower the penalties. But whatever you do, do not let this provision survive. It’s one thing to see a policy spin off the rails because of unintended consequences. It’s a whole other thing to build in a time bomb that will inflict completely foreseeable damage.

The unintended consequences of the free rider provision are bad – really bad – and actually have similar consequences to raising the minimum wage.  In this case, though, the free rider provision will incentive employers to hire part time workers over low-income workers, teenagers over single moms, and will end up doing just the opposite of what you’d think health care reform ought to do.  If we’re going to be stuck with a mandate, it should be across the board.  Of course, this can lead to some really expensive health care for people who fall outside the subsidies so…. 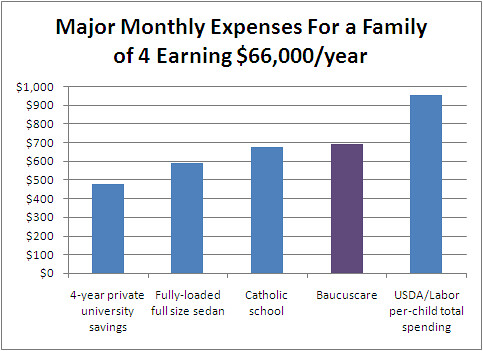 (Graph and numbers via Nicholas Beaudrot)

2) Increase the subsidies, and in particular, put more money toward out-of-pocket caps. The bill does a lot for the truly poor, and quite a bit for the nearly poor, but it doesn’t do enough to protect working families from the costs of illness. This costs money, of course. But that’s money you can get from implementing fail-safe policies like those advocated by David Cutler and Judy Feder. And it’s money that will prevent a massive backlash when struggling, sympathetic families are told they have to buy insurance they can’t really afford to use.

This is a fear I’ve had coming into the reform debate, actually – that reform measures would have too little benefit for the working middle class.  Real competition could help with this problem (see #3) but so could other measures, like a value-added-tax to help fund the higher subsidies possibly combined with meeting somewhere in between on income tax hikes between the Senate and House proposals (the House bill has higher taxes on high-income earners which, within reason, makes sense to me.)

3) Phase in Ron Wyden’s Free Choice amendment. This has three effects. The first is that it makes the bill better for the currently insured, as it gives them a clear benefit: the freedom to change their health-care coverage if they don’t like it. Second, the Lewin Group estimates that it raises more than $300 billion over 10 years, as workers choose more affordable plans and the government loses less tax revenue through the employer tax deduction. Third, it makes the system better by building out the alternative to the employer-based system. What’s not to love?

Seriously – what’s not to love?  This alone would make the Democrats’ health care reform proposals palatable to me.  As Dave Schuler points out, with health care costs projected to rise to rather epic proportions in the next decade or so, we have to do something now.  The status quo is simply not acceptable.

Yglesias thinks it’s quixotic to try to implement the Free Choice Proposal now, and he might be right – but it’s a shame that something that really ought to appeal to just about everyone on the right and the left should be so bafflingly controversial.

4) Create real competition in the insurance industry. Baucus’s plan doesn’t include a public option, doesn’t include a public option trigger, and even neuters the co-op option. I’m among the few who think there’s a real possibility that the new regulations will lead to a much more efficient and humane private insurance industry, but it is, after all, only a possibility. It’s much likelier to happen, however, if they’re protecting themselves against real competition in the market. And if it doesn’t happen even in that scenario, then at last people will actually have somewhere to go.

I’m of the opinion now that to make all this work – and to safely include a public option – we need to move away from the 50 states/50 regulations model and on to one national regulatory body, with interstate trade and competition.  With that in place, I see no reason to fear the public option, especially in its rather limited form.

5) Create incentives for bipartisanship. This bill was built amid a long, bipartisan promise. Baucus made real concessions to attract votes from his Republican colleagues. He made the bill cheaper, and eliminated the public option, and strengthened the protections against federal funding of abortions and benefits for illegal immigrants, and built in hard funding mechanisms that actually improve the deficit. Everything Republicans originally wanted is in this bill. It is, in fact, a moderate Republican bill. It looks like nothing so much as the bill Republican Senator John Chafee Sr. proposed in 1994.

This confuses me.  If the bill is actually a moderate Republican bill – why do we need to add bipartisan incentives?  Aren’t they already there?  I mean, yeah, increase competition – you can do that by changing the regulatory system we have in place and by adopting the Free Choice Proposal – but beyond that, I don’t see that the Democrats can move much further toward the center.

I’m really crossing my fingers at this point that we’ll get a few of these changes in the final bill.  I want reform to pass both for fiscal and moral reasons, and I think we’re on the verge of something very good if we can nudge it in the right direction.  Otherwise we might be left with something either very ineffective or something very bad, that actually doesn’t rein in costs and makes insurance even more expensive for American families.  I’m not quite as optimistic as Andrew is, but I hope my cynical side loses out this time.

We shall see.
See Also:  The Atlantic Wire on the 5 Worst Parts of Baucuscare

18 thoughts on “improvements to the current health care reform proposals”