Below the fold is a photograph Matt Yglesias took in Freiberg, Germany: 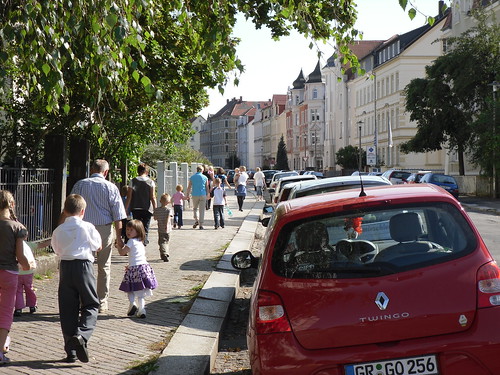 Meanwhile, as everyone knows dense, walkable areas may work in Europe where nobody has children but it could never fly in the U.S. where people need to tote the kids around. Or maybe it’s that there’s no way to build human-scale walkable communities without blotting out the sun with Manhattan-style skyscrapers.

It’s very much a chicken-and-egg thing though isn’t it?  I would have no difficulty transporting my daughter around via foot and cycle in a world built for walkers and cyclists.  In a world built for cars and minivans it’s much more difficult.  It’s also hard to break habits – and we’ve become accustomed to driving.

I live in a pretty walkable area, but to do the groceries I can either choose between the much more expensive nearby grocery store which I could walk to and from in probably about an hour (or by bike in about half that time) or I could take a much longer trip on foot to one of the grocery stores I like to shop at.  Of course the distance would eat up a ton of my spare time if I were to walk.   Biking is an option, but the route to the next-nearest grocery store is a little heavy on traffic and while I don’t worry about that with just me, I do find it a bit unsettling with my daughter in the bike trailer.  And here’s where you get the family argument.  Kids really do make traversing our streets outside of the steel confines of a vehicle much more difficult.  This isn’t because it would be some terrible struggle to walk to a nearby grocery store – it’s that there are no nearby grocery stores.

So we drive to get groceries.

And we drive when we need to go to Target or Home Depot.  Same problems with these places, as well as the movie theater.  They’re far away and there’s lots of traffic.  To get to my parents’ house we drive, because it’s easily a 45 minute bike-ride – which we’ve done before, but which generally takes up too much time.  It’s a half hour drive to my wife’s parent’s house so biking is out of the question.

We do walk downtown since we live downtown (not in Suburbia), and we go on lots of walks on the urban trails and the downtown streets for fun or to go out.  But other than bars and restaurants there isn’t much to walk to that we actually need.  And like I said, we live in a pretty walkable area.  It’s just that none of the stores where we buy our food or basic supplies at are located downtown, and nobody wants them to either.

The above photo is a great shot and illustrates very clearly the point Yglesias is making.  I do believe if we lived in areas that were more walkable, that provided us with choices for our basic necessities within walking distance, that we would walk whether or not our kids had to walk with us.  Since we don’t typically live in those areas, we generally drive.  The question becomes, what will nudge us away from the car culture and toward something better?

And I have no doubt that a walking culture would be better than a car culture (unless you happen to be a United Auto Workers Union member).  It would create a healthier, more community-0riented culture.  This would be good for our rising health costs and for our decaying family values.  It would be good for kids who spend too much time inside.  But other than very high gas prices and no cheap alternative in natural gas or electric cars, I don’t see much of a shift coming.  We can build these neighborhoods with density in mind, and it’s a good idea which I support – but I bet many of these dense urban areas will be prohibitively expensive for the average American at least for now.

29 thoughts on “Car Culture and Families”