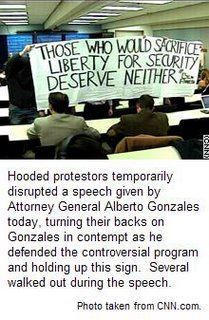 Both the President and the Attorney General have protested that Congressional leaders were kept informed of the domestic surveillance program, and that it was periodically reviewed within the White House for compliance with civil liberties. I doubt the latter portion is true, given the causal attitude that the Bush Administration has evidenced towards civil liberties in other contexts in the post 9/11 world. And Congressional leaders seem to suggest that they were not informed of the plan, and at any rate, “keeping them advised” is not the same thing as “earning their approval.”

Simply put, it’s not too much to ask that the government get a warrant to monitor communications. Contrary to claims from the White House, it is not cumbersome to get a warrant three days after the fact of surveillance. I just don’t understand how it could be cumbersome, and apparently no one can be told that without learning confidential information. So we just have to take their word for it that they’re not monitoring our phone calls or e-mails.
I’ve discussed world events with my cousins in Italy via e-mail. I wonder, were my e-mails read? Surely the NSA algorithms are trained to look for communications in a multiplicity of languages and if Google and Altavista can automatically translate Italian, it’s a safe bet the NSA is a few steps ahead of them and can readily comprehend my poor attempts at communicating in that language — and my cousins write back in English, too.