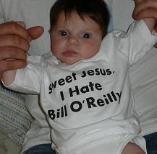 Bill O’Reilly claims that the reason conservatives are doing well politically and liberals are not is that liberals have not put forward any good ideas about solving America’s problems. I think it has a lot more to do with the right’s success in painting everything in moral absolutes and insisting that theirs are the white hats. This bothers me because I view both morality and policy as continuums rather than a set of polar extremes.

The gem of this column is the phrase “American women, particularly, do not respond well to nastiness.” Well, of all people, O’Reilly would know!

And while I’m at it — not funny, Ann. Justice Stevens is going off the Court feet first, no question about that. With Sam Alito certain to be confirmed, Ann Coulter’s unfunny “joke” amply demonstrates the impatience and arrogance of the right wing punditocracy which I have come to find so repellent. Can’t even wait until Tuesday, can you, Ann? And what’s the point of your column, there, Bill? Its only rhetorical object seems to be gloating.

I used to like these sorts of people. Now my level of toleration has diminished to dismissing them as immature and lacking social graces. William F. Buckley and George Will are at least well-mannered and didn’t need to resort to being rude to get a laugh.