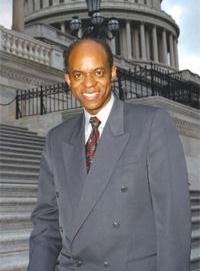 The man to the right is U.S. Congressman William Jefferson, a Democrat who represents the Second Congressional District of Louisiana (map to the lower right — that looks just little bit gerrymandered to me, but what do I know) and who is the focus of the most recent political outrage. 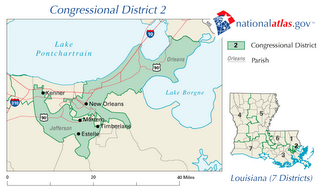 It seems that Rep. Jefferson may have been (gasp) tainted by corruption. Corruption of the really sleazy, obvious kind, the kind grown from too much certainty in one’s own power. A fourteen-month investigation recently culminated in a Virginia businessman giving Jefferson $100,000 in hundred-dollar bills. Alas for Rep. Jefferson, the businessman was wearing a wire, and $90,000 was found in Jefferson’s freezer later that night. These events took place in early August of 2005.

Thing is, when he’s not taking bribes, Rep. Jefferson has also been an outspoken critic of the administration. And Saturday night, evidence of the apparent bribe and a bunch more evidence of Jefferson’s corruption was used by the FBI in an 83-page affidavit supporting an application for a search warrant which was executed Saturday night on Jefferson’s congressional office on Capitol Hill. FBI agents were in Jefferson’s office for nearly six hours, presumably searching through everything.

The hue and cry against this has been carefully parsed — on both sides of the aisle — to not defend Jefferson personally. Which is good, and a smart move for everyone; the guy is obviously on the take. While Jefferson has publicly maintained his innocence, that sort of cry tends to ring hollow when some of the people who bribed him plead guilty to bribing him. (At least he’s not for sale cheap; $100,000 is a reasonably hefty bribe.)

But the thing is, no one can remember a time that the FBI has ever before raided a Congressional office. And Democrats have been preparing to organize their 2006 elections around attacking the Republicans’ “culture of corruption.” This obviously takes a lot of the wind out of those sails. So from the left, part of the outrage is caused by having a good weapon taken from them. But that the Democrats must now apologize for corruption within their own ranks even as they accused the Republicans of greater corruption causes me to shed no tears whatsoever — corruption is bad and there is little doubt that it exists in both parties.

But interestingly, from the Republican leaders of Congress have also come objections; Speaker Dennis Hastert has called the raid “unconstitutional,” and Majority Leader John Boehner has indicated that he believes the issue will undoubtedly be resolved by the Supreme Court. Even the excerable Bill Frist has joined the challenge to the Administration based on this activity.

What’s the Constitutional issue here? Jefferson was corrupt, he had been served with a subpoena a month before to which he had not complied, there is substantial reason to believe he is implicated in a crime, and the FBI had been investigating him since early 2005. Certainly we want the FBI to investigate corruption and prosecute it where it is found — while it is odd that the political winds blew exactly this way, the wheels had been set in motion well before this.

The argument that I have heard is that the raid implicates Jefferson’s ability to freely discharge his deliberative duties as a member of Congress under the “speech and debate clause.” I can’t agree with that. First of all, Jefferson does not enjoy immunity from criminal prosecution, whether he is actively engaged in discharging his Congressional duties or not. The “immunity clause” applies only to civil claims directly related to a Member of Congress discharging his duties — he can and should be subject to criminal liability during his time in office and cannot freely commit crimes, even petty ones, and even while giving a speech on the floor of the Congress itself. Williamson v. United States, 207 U.S. 425, 446 (1908). Investigating and prosecuting the motive for a particular legislative action is fair game for law enforcement; prosecuting the action itself is not. United States v. Brewster, 408 U.S. 501, 526 (1972), aff’d, United States v. Helstoski, 442 U.S. 477 (1979).

And I’m the one who has been screaming for months now that the Executive Branch needs to work within the Constitutional scheme of separation of powers and checks and balances to gather information in the discharge of its duties, both related to military power and in law enforcement. This is clearly law enforcment — and the FBI got a warrant. So the FBI sought judicial approval for its actions, and got it. The demands of separation of powers are met; two branches of government acted in concert to police against corruption in the third.

And I am not impressed with the argument that there is a “tradition” of deference to Congressional offices by the FBI. Traditions can be wrong sometimes; traditions can be changed; traditions are not written down in our laws or Constitution. That does not mean that traditions are without value or importance. It means that hiding behind a “tradition” is not the same thing as invoking the Constitution. That the raid on the Congressional office took place at all is extraordinary in that it goes beyond the tradition of the President letting Congress do its own thing.

Yes, it is odd that a critic of the administration, from an area with a lot of things to criticize the administration for, should get this kind of ground-breaking treatment. And it is almost certain that high-level officials, most likely including Attorney General Gonzales himself, were knowledgeable of the progress of this investigation and likely involved in directing it at some level. But, other Members of Congress are similarly under some form of investigation for corruption. As one commentator points out, serious corruption issues have been in play for ten Members recently: William Jefferson (D-LA), Tom Delay (R-TX), Bob Ney (R-OH), Jerry Lewis (R-CA), Duncan Hunter (R-CA), Virgil Goode (R-VA), Richard Pombo (R-CA), John Doolittle (R-CA), Dave Weldon (R-FL), and Randy Cunningham (R-CA; resigned after pleading guilty to corruption). He forgot Katherine Harris (R-FL), who is mixed up in the Cunningham-Goode corruption issue. Still, Jefferson is notable for his being alone on that list as part of the minority party rather than the President’s party. However, as the prosecution of Duke Cunningham shows, law enforcement is going after Republicans on the take, too. That Jefferson is a Democrat caused Atty. Gen. Gonzales to lose absolutely no sleep, I’m sure. But Jefferson was going to go down anyway. Hopefully, anyone else on that list who really did break the law will suffer similar fates — corruption in Congress hurts the country as a whole and I’m pleased to see that law enforcement is doing something about it.

Come to think of it, there’s a lot of Republicans from California on that list of suspicious politicans. Hmm….

Anyway, I just don’t see a Constitutional problem here — because the FBI got a warrant. If they had simply unilaterally raided Jefferson’s office, I’d be crying bloody murder, too. But they didn’t. This time, the Administration respected the system of divided powers set up by the Constitution. It wasn’t too much to ask that they take the time to do it right, and that’s what they did.

And to me, that makes all the difference in the world. I cannot join the chorus of those who criticize this recent development. Jefferson is obviously a crook. I’m glad he’s in legal trouble for taking bribes. His Congressional office is not entitled to any special immunity for him to take bribes within. Neither he nor his colleagues should feel any chilling effect in their ability to debate the issues of the day because law enforcement is looking out for corruption within their ranks. It is Rep. Jefferson who abused his power in this case, not the FBI or the White House.