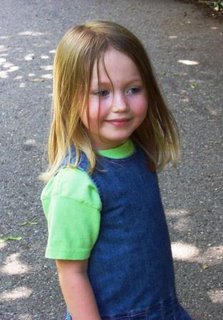 We got here Friday afternoon and met up with our friends. After only a few moments, we got re-acquainted with their precocious and adorable young daughter and their two cats, including the playful Spencer and Kinsey, the Cat of Ultimate Evil. Actually, Kinsey is a sweet cat, but she looks at me like she hates me. Clare, our friends’ almost four-year-old daughter, has of course dominated the weekend. 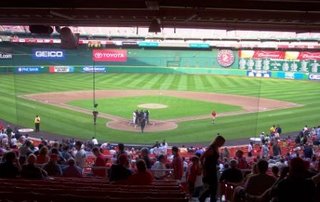 So when the sitter showed up, we left to go to RFK Memorial Stadium to see the Nationals take on the Dodgers. RFK is an older stadium, and still one of the multi-use stadia. Football and soccer are played there in addition to baseball, but aside from some blocked-off seating, they do a very good job of dressing it up for baseball. Our friends got some fantastic seats — the picture to the left is taken from our seats. 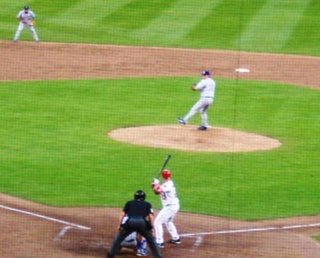 To the right is Dodgers pitcher Jeff Tomko, throwing one of six RBI doubles resulting in the Dodgers’ loss. I complained a while a go that the Dodgers have good pitching but no sticks. I was proven half wrong by the game last night. There wasn’t any good pitching going on, either. On the plus side, though, The Wife had a fantastic time. She even admitted it. Maybe I can get her to go to some games once we get out to California. 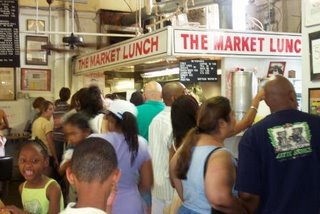 Yesterday we got up early and went out to the Eastern Market, where we were told we would have some extraordinary pancakes. They were quite good, although standing in line for an hour to get them was not a good prelude to eating them. The Eastern Market was really a cool place; fresh, good produce and lots of fresh flowers. We bought our contribution for tomorrow’s barbeque at one of the butcher’s counters, and The Wife was good enough to realize that the other ingredients for my steak. 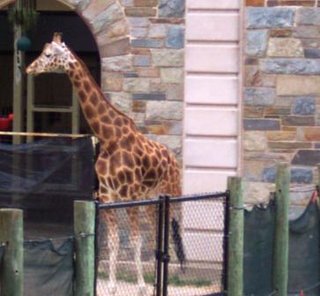 After that was a crowded visit to the National Zoo. It was a very full day and we had to park on Connecticut Avenue and walk up and down the hill to go see everything. The Amazonia exhibit was most interesting, but I got the biggest chargeout of seeing big cats. Clare was the most amusing when we asked her what sound a giraffe makes and she was stumped. We let her off the hook early, though.

Our friends had a wedding to go to last night so they cut us loose and we went to downtown Arlington for dinner. Arlington was very crowded, and we ran out of cash at the parking garage — very embarrassing. D.C. is a fun, generally good-looking city (even the less-than-good neighborhoods) but it can get expensive.

We had been looking forward to walking The Mall and a relaxing barbeque with friends tomorrow. But there is a “Rolling Thunder” rally today and over thirty thousand bikers are predicted to show up and watch Nancy Sinatra perform by The Wall. We’re actually quite tired; 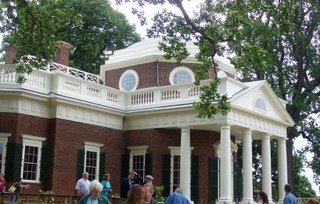 I’d forgotten from my last visit just how much walking around is involved in a trip to D.C. It’s nice to have a walkable city, and the collection of monunments and symbols of nationalism adds to the enjoyment of being here. After Thursday, when The Wife and I went to Monticello and marvelled at the ingenuity of one of our finest Founders, I had hoped to find it inspiring again to see all of these symbols of the greatness of America. But for the sake of our ears and our sanity, we will avoid the crowd and defer a visit to the mall and the Second World War Memorial (which I have never seen) until some other time.