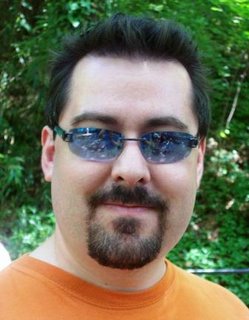 For the past five weeks, I’ve experimented with controlled growth of a mustache and a trimmed beard, commonly called a “goatee.” It’s not a classic goatee in the sense that I’m not letting the beard hair grow long and hang down like a goat’s beard. As you can see, I’m keeping it relatively neat and trim. It’s not quite growing in as thick as I would like on the right side of my mouth, and my lower lip is not filling in at all, it seems.

Yesterday night, I picked out most of the gray whiskers from the beard with a tweezer. Ow. I haven’t bled that much out of my face since I first learned to shave. At least I didn’t cry like a little girl when I did it. Much.

Grooming the beard turns out to be a bit more complex than I had anticipated. Every day, I shave off my cheeks and neck. This cuts down on the itching quite a bit. Then, I have a little comb which I use to straighten out the whiskers and get them all going in the same direction. Then, I trim off the excess length on the mustache to keep it from protruding on my lower lip, using a small scissors. Every couple of days, I use a small battery-powered clipper to keep the rest of the hair the length I want. I’ve been trying the longer setting but the mustache is getting to the point that it bugs me, so I’m working with the shorter setting up there for now.

One of my friends says it makes me look more Italian. The Wife says she likes it except for how scratchy it is when she kisses me. My friends in DC didn’t comment on it at all. I’m wondering now if I should keep it after I resume formal law practice in a professional office environment. I’ve heard it said (by people who say such things) that men with beards inspire less trust than clean-shaven men. Apparently the beard is a subconscious indicator that the man wearing it has something to hide. I want to inspire trust in my clients and respect in my peers; if the beard gets in the way of doing that, of course, it goes. If The Wife says she doesn’t like it, it goes. But I’m kind of enjoying having it in spite of the more-elaborate-than-expected grooming that goes with it. With a recent short haircut, I think the effect is maximized.