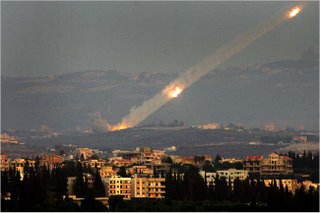 The picture to the right is from Getty Images and France Presse, taken from today’s Gray Lady, and it shows a Hezbollah-fired Katyusha rocket taking off on its way to some target in Israel. The rocket was fired from the middle of a civilian neighborhood near the city of Tyre. Israel is being roundly criticized the world over for its strikes within Lebannon, which have resulted in civilian casualties. This may have been the strike that killed twelve Israeli soldiers on a kibbutz (one inside the Green Line, I might add).

But here’s the thing. What is Israel supposed to do about this rocket blast? Here’s some options:

1. Israel can take zero military action, and attempt a diplomatic resolution of the situation. It has tried this in the past, so as Dr. Phil would say, “How’d that work out for you?” Let’s see, Dr. Phil — three years of diplomacy from 2003 to 2006 resulted in constantly-escalating levels of terrorism within Israel’s borders, beginning with street shootings, escalating to suicide bombers, and finally reaching a crescendo in a border incursion to capture of Israeli military personnel on border patrol. Diplomacy has been a singular failure because Hezbollah and Hamas are not states; they have no territory to lose and their leaders have gained power through advocating platforms of implacable hatred of Israel and advocacy of its utter destruction. So if Israel lays down its arms, Hezbollah and Hamas are not going to stop attacking Israel — they may not even pause to notice the tut-tuts of the United Nations because guess what? They don’t give a damn about the United Nations. So stopping the fight would be a victory by these two quasi-states. And remember, Israel’s fate is that it gets to fight lots of wars, but it only gets to lose once. After Israel loses a war, it is extinguished.

2. Israel can send commando troops on the ground to look for the source of the rocket. This means, in the case of a rocket fired from suburban Tyre, dropping paratroopers in the middle of a city with no feasible extraction plan. What’s more, the Katyusha is a mobile-launched rocket, which means that by the time the commandos find the source of the fire, the bad guys will have moved on to some other location, so that leaves Israeli commandos on the ground, surrounded by hostile civilians, with no way to safety. This does not seem like a very good plan to me, particularly not for the commandos involved. I know those guys are good, but no one is that good. Not even in the movies did Rambo or Chuck Norris navigate 100 kilometers of hostile urban territory, in the middle of a war zone, to get back to safety after being given a certain-to-fail mission.

3. Israel can respond with an immediate airstrike. Having seen a rocket fired at them from this precise location, it is difficult to see how a strike at this location is anything but a legitimate counterattack intended to knock out a hostile military objective. The problem is, some civilians are going to get hurt and likely some will die. To this, I say, whose fault will that be? The Israelis did not choose to launch this Katyusha rocket from a suburban neighborhood. Hebollah’s soldiers could have moved the rocket out to the open field in view in the very photograph pictured above. So, option #3 is about the only workable one that I can see available.

Now, let there be no doubt: Israel’s military adventure, now entering its fourth bloody week, is a proxy war between the United States and Iran just as surely as any Cold War conflict was a proxy war between the U.S. and the Soviet Union. Who is supplying these entities with all these rockets? Iran. And Syria. Who is supplying these entities with money? Iran. And Syria. And maybe the Saudis, we’re not sure yet.

Why are they doing this? Simple — it makes them better-off than they were otherwise. Pretty much every Muslim who lives in a country that touches either the Mediterranean Sea or the Persian Gulf hates Israel. The leaders of these countries know this and know that they will be popular and their brutal, repressive, dictatorial regimes will enjoy greater popular support if they blame their economic and political troubles on Israel. Hezbollah and Hamas provide a cheap, convenient way for these countries to project their power beyond their borders with sufficient deniability and cover that those who, for their own reasons, want to side against Israel can do so. So do death squads wandering about Baghdad, killing Sunnis and various Shi’ite factions there.

If these tendrils of power extended from Damascus and Tehran are severed, the coalescence of Shi’ite superstate rallying around the extinction of Israel will be set back tens of years. As it is, the only thing preventing a nation stretching from Zahedan to Tyre from forming is the inability of its would-be leaders from agreeing on a command structure. That battle, for those who haven’t been paying attention, is being fought with suicide bombers and assassins in Baghdad as we speak. Yes, I know this sort of thing has been tried before, based on nationalistic and ethic impulses, but the pervasive power of religious fundamentalism and focused hatred of a common enemy — Israel — may prove that hate rather than love is better at unifying these disparate nations into a single entity, and if a capable leader emerges at its helm, there could be real problems.

Israel, for its part, is most certainly the client state of the United States; it is our closest and most loyal ally. Our own military is tied down playing whack-a-mold to keep any of the various factions of Muslims from gaining dominance over one another by being dominant over all of them at once. Difficult to do in the face of asymmetic counter-attacks, but we have little choice but to ride the tiger as long as possible, until some modern-day Metternich comes along who can broker an acceptable regional balance of power. Our forces are too strong to attack directly. So the attack is against our client, which must now defend itself since we cannot extend much of a helping hand other than to continue to resupply it with weapons and ammunition.

So there will not be real a diplomatic solution to this problem any time soon. No one really wants the fighting to stop; for the time being, the fighting is in everyone’s interest.

Israel needs to extinguish Hamas and Hezbollah’s very existence in order to put a (temporary) halt on acts of terror within its borders.

Hamas and Hezbollah, for their part, need to extinguish Israel’s existence because that is what they have promised their followers and their supporters.

Syria and Iran need to see limits placed on the power of the U.S. in the region to preserve their spheres of influence and autonomy, and they need to tie up the U.S.’s military resources so that they are free from the threat of U.S. invasion themselves.

We need to prevent, at all costs, the formation of the Shi’ite superstate which will become a new Soviet Union motivated not by political ideology and a need for self-preservation but rather by suicidal, messianic fundamentalism.

The international community, personified by the United Nations, seems to think that the world would be best-served if Israel were no longer a part of the middle eastern equation. It is this part of the equation that is most offensive to me.

Regardless, everyone needs to see who wins on the battlefield. Remember what I said a few days ago: there’s good guys and there’s bad guys in this fight. And there are consequences to us depending on who wins. To our friends in Israel who are fighting and dying, I say with sobriety and sincerety, “mazel tov.” We need you to win.