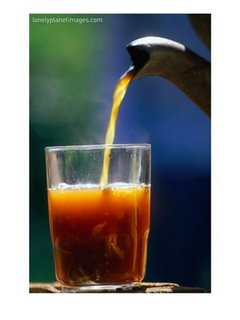 Both Hezbollah’s TV network and Israeli TV news have aired, and the rest of the world has picked up, video of a Lebanese general and his staff serving glasses of tea to invading Israeli soldiers after they surrendered their station near the border without a shot during the recent war. Hezbollah has done this because it discredits the regular Lebanese army with its Shi’ite supporters in southern Lebanon.

The general did the right thing by surrendering to the Israelis, from what I can gather. He had a skeleton crew of troops at his disposal, and the Israelis were pounding the hell out of anyone who shot back at them. He had been sent to this post by the government to dispense and coordinate humanitarian aid to displaced civilians, and his soldiers were minimally armed. Resistance would have been futile, would have hampered his fulfillment of his mission, and resulted in escalating the military conflict to positioning the government of Lebanon against Israel after the government had carefully tried to isolate Hezbollah as the real target of the fire, and the Israelis obliged them by concentrating their attacks only on Hezbollah-controlled sites.

Perhaps what Hezbollah is upset about was the Lebanese general’s refusal to escalate the war and bring the government around by necessity to Hezbollah’s side of things. That, however, is not what is inciting all the anger. No, the real treason, Hezbollah implies, was treating the Israelis like human beings and showing them hospitality at all. I suppose the Lebanese soldiers could have surrendered in a more contemptuous way, and officially the government of Lebanon forbids its citizens contact with Israelis.

The Lebanese are not a homogenous people. There are Shi’ite Muslims, Sunni Muslims, Christians, and Druze in that country, and there are more Christians in the south of Lebanon than Muslims. There are ethnic Arabs, Turks, and Persians; many people have English and French blood flowing through their veins as well. If Israel is likely to ever have a good Arabic neighbor, the likeliest candidate for that good neighbor would have been Lebanon rather than Egypt or even Jordan.

I think this general should be praised by his countrymen. Not because he surrendered, but because he saw the situation for what it was and acted appropriately. He saved the lives of his men and the civilians in the area; he did not create an obstacle to the tenuous cease-fire that even then was in the works; he kept himself in a position to fulfill his mission of dispensing humanitarian aid. He also made Hezbollah look bad along the way, and showed his countrymen that they can co-exist with their Jewish neighbors to the south. And that’s another reason why I say that he’s the hero of the Lebanese Tea Party.

I also note that, despite many claims that Israel indiscriminately bombed out Lebanese infrastructure like Beruit’s international airport, that airport is now open for business again; flights from Syria, Turkey, and Iran landed today; British Airways and Air France will resume flights there on Sunday. No war can achieve surgical precision, but Israel has tried using strong language and diplomatic scolding before, and it just didn’t work. So could it be that Israel really did only try to knock out enough easily-repairable facilities to prevent Hezbollah from being re-armed by its Syrian and Iranian sponsors, and that it tried to leave as many innocent civilians alone as it could?

There are still good guys and bad guys in this fight, and while there’s a truce going on right now, don’t be fooled — this war is not over; it’s been going on since 1948 with various pauses in the action. This is just another chapter, and I’m not even sure this chapter is over yet.