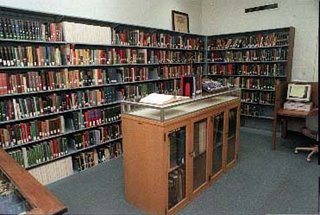 Lots of people think history is boring. That’s probably because they had boring history teachers who tried to get them memorize mind-numbing lists of dates and battles without ever trying to make anyone understand why they are important. But if you made a movie about an invasion, a conflict of radically different cultures, questions about moral right and wrong, and best of all, cannibalism, you’d have yourself the makings of a pretty good story.

Such, we now know, was part of the Spanish invasion of the Aztec Empire in the early sixteenth century. A scant twenty years after Columbus reported the existence of the New World to Europe, armed Spanish expeditions came and set up camp on their own. Legend has it that because the Spaniards had white skin, the Aztecs worshipped them as gods, and that they put up only a platry resistance to the Spanish invasion.

We know better now. First of all, we know it is likely that the Aztecs had, about one generation beforehand, made contact with other colonists and traders from beyond the sea — the Chinese. Artifacts strongly suggesting trade between the Aztecs and the Chinese have been found in sites all along the Pacific coast of Mexico. So too is there evidence of pre-Columbian incorporation of chickens into the Aztec diet — chickens not being indigenous to the Americas, they had to have come from somewhere. Then there is the issue of the source of the legends about fair-skinned “gods” from beyond the seas. Where would the Aztecs have come in contact with fair-skinned people before the Europeans came? It is easy for us to forget that to the eyes of a fifteenth-century Aztec, a person from China would appear to be very fair-skinned. And finally, there are reports of Spanish explorers in the Americas finding descendents of the Chinese, describing them as uncharacteristically fair-skinned, speaking a language unlike any of the other “natives,” and (here’s the clincher) wearing silk clothes. The descendents of Chinese colonists were found in areas known today as Wisconsin and Colorado; to this day, there is a village in Peru where all the inhabitants speak a pigdin form of Mandarin Chinese. Compelling, but admittedly not conclusive, evidence that the Chinese treasure fleets visited the Pacific coast of the Americas in the 1450’s. 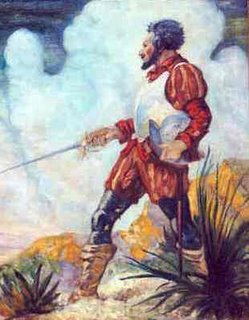 So, it is entirely possible that the Aztecs were not so impressed with the Europeans as we have been taught — because they came from a different ocean than the previous visitors. It is also quite likely that the Aztecs figured out right away what the Spaniards’ armor and guns were and understood quite well who they were intended to be used against. These were not stupid people. What they did not know was that the Spaniards’ best weapon against them was one they could neither see nor comprehend; the Spaniards defeated the Aztecs not by force of arms but through biological warfare. 200 conquistadores on horseback with steel swords, armor, and muskets could certainly mow through large numbers of soldiers armed with stone, wood, and bronze weapons — but they would still not be able to overwhelm a determined army of tens of thousands of strong soldiers. But they didn’t have to, because those soliders were weakened and killed by bubonic plague, smallpox, and a host of other bacterial and viral pathogens not previously known by the Aztec people. (This begs the question of whether the Chinese traders of the 1450’s communicated Asian pathogens to the Aztecs, and in all likelihood they would have done exactly that.)

So imagine you’re an Aztec in the early 1500’s when Cortez lands. Your grandparents told you stories about the mighty ships that came from the west when they were young, bearing gifts of great luxury to trade, wearing shiny fabrics of stunning beauty, and new foods to eat. The fair-skinned sailors never came back. In the meantime, you’ve been at war with your neighbors to expand the Empire, and participated in the religion you’ve been raised to honor all your life. You’re pretty proud of yourself for being part of the most technologically advanced, richest, and most powerful nation on earth. 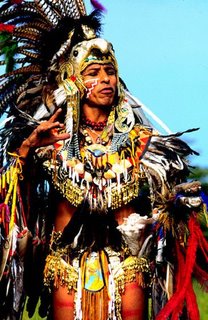 Suddenly, from the east, more ships come. They are big, but not overwhelmingly huge; perhaps three to four times the size of the outriggers you are used to seeing ply the coasts of your homeland. On the ships are men who are fair-skinned — but they do not wear colorful fabrics and instead wear shiny metal plates. They offer little food and are uninterested in trade. Soon, they begin demanding gold and that you forsake your gods in favor of theirs. They carry what are obviously weapons — strange weapons, but clearly powerful ones. You would have realized almost right away that these were not the traders from the west you heard stories of. These are clearly warriors — enemies — come to conquer your lands. It wouldn’t have taken you very long to realize that war had come to visit you in your own back yard.

Shortly after they arrived, a great pestilence would have begun working its way through your peoples. You likely wouldn’t have known that it was not doing something similar to the invaders, because after enough of your countrymen had been enslaved and stripped of their gold, you would have started to fight to defend yourself, your nation, your family. You likely would have questioned your earlier hubris about your wealth, power, and technological sophistication, but it doesn’t matter if the alien invaders had weapons different than yours — the need to defend yourself would have been overriding. Perhaps you would have tried to have learned how to use their weapons; you would certainly have wanted to have taken their strength to use against them and thus neutralize their advantage. (Thus the cannibalism, a teaching of the prevailing religion of the way to take strength from one’s enemies.) You would certainly have seen that these were mortal men who could die in combat. If you had ever entertained the thought that these were gods on earth, you would have quickly disabused yourself of that notion.

Perhaps this is not as comforting as the thought that the primitive natives were awed and overwhelmed by the mighty European settlers. But I’d rather know the truth than a pleasant legend. And the original legend wasn’t even particularly pleasant. I’ll leave whatever parallels to modern events you care to draw to yourself; what intrigued me about this story was not so much the lurid evidence of ritualized cannibalism but rather the fact that it demonstrates that a fierce, and for a while successful, resistance to the invasion was mounted, poking a hole in the traditional history we learned as children in grade school.