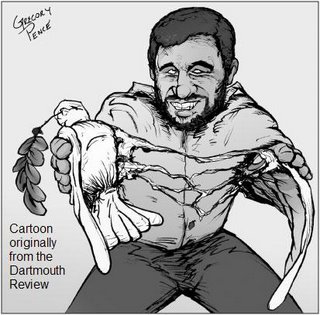 It’s easy for me to appreciate the daunting challenges faced by diplomats and world leaders. Trying to find some kind of common ground with guys like the President of Iran must be a huge challenge. He complained to the United Nations today that there was no outcry of human rights violations levied against Israel during its recent war with Hezbollah, claiming that there was “blanketed and unwarranted support” for Israel during that conflict.

Dude, I know good and well that you can get CNN in Tehran. I know that the BBC is available there, too. And I know good and damn well that you can watch Al-Jazeera all day long in Iran. And I know that there were lots of talking heads, lots of Palestinian, Syrian, and Iranian mouthpieces, proxies, PR flacks, and spinmeisters hitting the airwaves every damn day. I remember lots of images on TV of ruined Lebanese villages, piles of rubble where apartment buildings used to be and pictures of Lebanese people, rendered homeless, grieving over their lost loved ones. That there were also similar pictures coming from Israel only proves that 1) the Israelis took their lumps, too, and 2) Israel, unlike Hezbollah-controlled southern Lebanon, permits a free press.

So I don’t want to hear about how the Western media and the people of the West uniformly gave blanket support to Israel. Because we didn’t. A lot of us, myself included, had to go out of our way to remind others in the West that yes, there were good guys and bad guys in that war and that Hezbollah is not an organization of good guys.

To suggest that Westerners gave their uncritical and unflinching support to Israel is revisionism at its finest. To make that suggestion before the gathered heads of state of the entire world is revisionism writ upon the largest of all possible canvases. Would that we had actually done as Ahmadinejad suggests we did. Perhaps we would have been able to wipe those bastards off the planet entirely. And then we could credibly tell this dude that we mean it when we say we want his mullahs to stop enriching uranium.