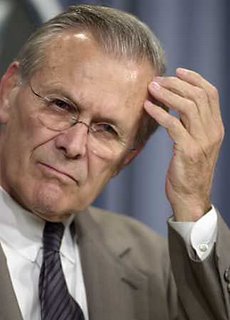 In 2001, the explicit warnings of Colin Powell that we were being fed a line about invading Iraq were ignored, and the President put his faith in Donald Rumsfeld’s assurances that Iraq could be converted into a steadfast ally formed the basis of the central feature of George W. Bush’s presidency — overshadowing even 9/11.

Then, a graphic demonstration that Ahmed Chalabi’s honeyed predictions about a glorious post-war Iraq, poured into the Administration’s ear via Donald Rumsfeld, was not true, was not enough to shatter the President’s steadfast faith in his Secretary of Defense.

After that, widespread criticism that not enough boots were on the ground to complete the mission of pacifying Iraq was not nearly enough to break Bush’s loyalty to Rumsfeld.

The President has never once deviated from the cognitive dissonance of the Secretary of State’s insistence that great resources are being placed into the hunt for Osama bin Laden, while also insisting that finding him is really not all that important. It obviously can’t be both — either it’s worth it to invest a lot of resources in finding and killing the guy, or it’s not.

Subsequently, the apparent impotence of the United States to respond to military challenges from North Korea and the proxies of Syria and Iran were not a demonstration to the man in charge that something was amiss in the Pentagon. 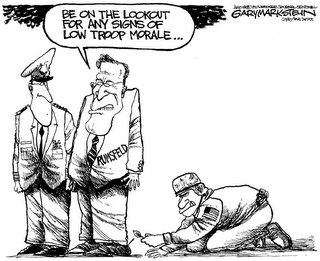 Neither was the call by an assortment of Congressional leaders from both parties and recently-retired generals, and the apparent behind-the-scenes critiques of serving general officers, for the resignation of the civilian leader of the military. Instead, we heard a drumbeat of praise and support from the White House, the equivalent of “You’re doing a great job, Rummy.”

The unprecedented editorial of the military newspapers calling for Rumsfeld’s removal from power also failed to convince the President that one of his principal advisers was letting him down. As recently as Sunday night, George Bush insisted that Donald Rumsfeld was going to serve as Secretary of Defense until Bush’s successor took office.

But let it not be said that George W. Bush is completely dense. The American public throwing the GOP’s majority in Congress out on its ear was a sufficiently clear message to the President for it to dawn on him that, indeed, something has gone terribly wrong. And so this morning, Rumsfeld was resigned from the Administration, to be replaced by another old Bush friend from Texas, a man with an intelligence and administrative background who seems qualified for the job.

What I wonder now is whether Bush thinks that sacrificing Rumsfeld will be enough to placate the public. Obviously, it won’t; the American people want to see something different being done and made that desire well-understood. Voting out Lincoln Chafee, a Republican who voted against the war, in favor of Sheldon Whitehouse, a Democrat who voted for it, is as clear a sign as I can think of that the American people are resentful of being misled about the WMD’s, displeased with the continuing violence in Iraq, and nervous about the overextension of our military caused by the ongoing misadventure in the cradle of civilization. What alternative it is the people want to see is unclear — but what is clear is that we want something different with regards to the war, because what Rumsfeld has been having the military do for the past six years is simply not working.

Here’s hoping that the incoming Secretary of Defense, Robert Gates, is able to put together a better plan, one with a credible exit strategy and an endgame that is at least marginally acceptable to our economic, diplomatic, and security interests.