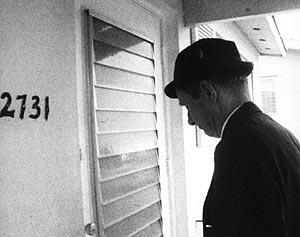 So I’m sitting on the couch, talking with my father on the phone. The doorbell rings and The Wife gets up to answer it. We’re not expecting anyone so I figure it’s a solicitor of some kind; The Wife will say “no,” and that will be that. But she doesn’t come back for a while.

So I get up and sure enough, The Wife is standing there in the doorway and there’s some kid with acne and looking all of seventeen years old. The Wife is holding this folded-up piece of paper with a bunch of photographs of magazine covers with prices listed on them. I say to my father, “Here, you can ask The Wife that,” and hand the phone to her. The kid selling magazines hasn’t come up for air the entire time, he’s so busy spouting out his patter.

“Thanks, have a nice night,” I say, closing the door.

“Well, you don’t have to be rude about it!” he replies.

I finish closing the door and that ends the encounter. But I’m thinking to myself, “Dude, that wasn’t even rude. It was firm. If you want rude, I’ve got lots of rude for you.”

What’s the difference between my “firm” and what I’m calling “rude?” The story goes, one of our friends, six months pregnant at the time, confronted a trespasser in her back yard with the phrase “You! Get the f— out of my yard right now or I wil f—ing kill you!“

So it’s probably just as well that this guy didn’t get a taste of what real rude sounds like.