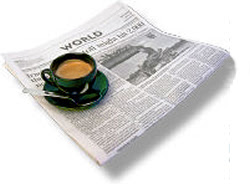 Turning to CNN.com this morning, I scanned the headlines to see what articles interested me.

Then the #2 story was “Denver blizzard snarls air traffic“. Certainly a story worthy of attention; it’s affecting a lot of people. But not me or anyone I know.

Then there’s “Rosie v. The Donald”. This is news? I’m not even going to dignify it with a link. Rich people behaving badly sounds like my work; if I wanted to get more of that I’d go to the office.

Probably the most significant item on the entire page was “Britain, France push for U.N. vote on Iran sanctions“. But no, I didn’t read that one first.

Guess which one I picked to read first, Loyal Readers.