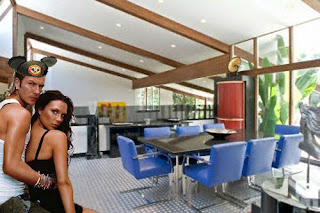 Like another couple pictured to the right, The Wife and I are house hunting. Our budget is somewhat more modest than Dave and Vicky, but we’re hopeful we can find what we’re looking for anyway.

So, this weekend’s primary activity was house hunting with The Wife. She found a floor plan online that she fell in love with. To me, falling in love with a floor plan seen on the internet is not comprehensible, but that’s what happened. So we drove around to the address where the developments were going to see the floor plan in real life. The developer indicated that the floor plan would be available in three locations.

At the first location, there was a retaining wall surrounding a dirt field. Not even a sales office.

The next location was twenty-one miles away. We drove there and found nothing but older developments. We tried looking for the marginally-employed people holding signs to guide home buyers to the developments, but there were none to be found.

The third location was an alfalfa field north of the aircraft assembly plant, inhabited by sagebrush and Joshua trees.

So we found another tract being built by the same developer, and went into a sales office there. It was a madhouse. There were people waiting in line to buy houses. We were collared by a real estate agent before we even walked in the door. After some difficulty, we got directions to the site where a model of the house could be found — about a mile from where we had been earlier that day.

But we didn’t just tour that house. Oh, no. That house was nice but we had to see the other five models also. I got a kick out of the one with the foyer with a mosaic floor in the turret, with a big heavy oak door facing the entryway. (Someone knocking on the door could say, “Open in the name of the King!”)

Virtually all of the houses were way too big for The Wife and I. It’s just us and our critters, and we’re not real big on the whole formal room thing anyway — we rarely use our formal dining room now and never use the formal living room. Both of these are dens for the animals, who could care less about the extra space. We also don’t need four bedrooms — ideally, we’d have two but will probably have to put up with three.

We looked again today, at two open houses and one built by a developer that hasn’t been sold yet. Two houses that we saw were suitable for us. Both had the “great room” design, rather than having divided spaces. I favor this idea because the fact of the matter is that most of the time people are in the casual rooms or the kitchen anyway, even when you have guests over. Formal dinners and cocktail parties are not really part of our lives, so we’d rather have a house set up for relaxed everyday life and causal entertainment.

The good news is that, by California standards, these kinds of houses — 3+2 with great room and adjoining kitchen — are on the “affordable” end of the spectrum. The bad news is that there just aren’t very many of them out there. Developers seem to think that people want to buy the biggest houses they can, with the greatest number of rooms possible. Formal dining rooms, eat-in kitchens, formal living rooms, parlors, libraries, offices, and even conservatories in which Colonel Mustard might use the revolver.

Master bedrooms have grown to “master suites” in a lot of these houses. Instead of a larger room with an adjoining bathroom, now there are cavernous complexes of rooms, with arched entryways to dual walk-in cabinets. This is just the master suite, remember. Several of the houses we saw (for me, they all start to blend in together after I’ve seen three models) had separate seating areas within the master suites.

No, not for us. Less is more. Great rooms are great. We don’t need, or want, master suites with separate seating areas long enough to install bowling lanes. This isn’t a room at the Plaza, it’s where we intend to live every day. And we don’t spend a whole lot of time (awake) in the master bedroom anyway. Back when we lived in the Estate at Louisville, we made a point of using the smallest available bedroom for our sleeping purposes.

So it’s proving to be something of a challenge to find the right house. The one model The Wife found was, indeed, very much what we’re both looking for. We intend to buy the house and stay put for some time, so it pays to look around and take our time. It also pays to think about the neighborhood the house is in — to me, that is probably more important than the house having the perfect layout. Methinks The Wife’s priorities are a bit different, but that’s what all the shopping about, so that we can both get what we’re looking for. There’s no reason we shouldn’t have both.