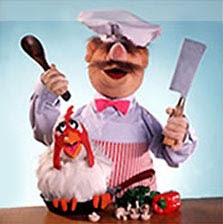 It’s not my own headline, but I couldn’t possibly have improved on it. And it’s 100% accurate. Seems that a sous chef for a high-end seafood restaurant in New York copied, ingredient for ingredient and technique for technique, all of the significant recipes of the restaurant that he worked out, and used them in his own place.

“The stakes are so high,” said an intellectual property lawyer asked to comment on the situation, and I agree. But the thing is — what was the theory used by chef claiming that the other chef stole her work? It probably isn’t a trade secret — most restaurants do not make their workers sign non-disclosure agreements, even though a secret recipe is a classic example of the kind of information that is protected by trade secret law. And this most closely resembles a trade secret claim.
Maybe it’s copyright. Of course, that would require that a) the chef who made the recipe had written it down somewhere, and then that b) the sous chef copied that writing (rather than, say, being told what went into the dish and reconstructing it from memory), and c) that the now-former sous chef copy and exploit the recipe.

An interesting story to follow. I hope that there is follow-up on it.