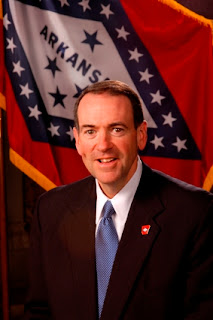 A professed believer in Biblical inerrancy, Huckabee served as pastor of several churches in Arkansas before entering politics. As President of the Arkansas State Baptist Convention, he worked hard to encourage churches to integrate, including several very prominent and formerly exclusive churches. He also worked as the president of a religious-programming television station.

He plays bass in a rock band called Capitol Offense. As Governor of Arkansas, he famously lost 110 pounds and held himself out as an example for improvement of personal health. He and his wife have three grown children.

Huckabee’s first political race was for the U.S. Senate seat held by Dixiecrat Dale Bumpers in 1992; he was badly defeated, earning only 40% of the vote. However, he gained statewide notoriety from the race, and in 1993 was elected Lieutenant Governor in a special election (the old Lieutenant Governor, Jim Guy Tucker, became Governor when Bill Clinton became President of the United States). Interestingly, Huckabee was advised in this election by Dick Morris, who first came to prominence as an aide to Bill Clinton.

Huckabee was elected to a full term as Lieutenant Governor the following year with a convincing 59% of the vote, and while Lieutenant Governor made Tucker’s life very uncomfortable, including spearheading “No” vote campaigns on two initiatives backed by Tucker. Tucker was caught up in the Whitewater scandal that plagued the Clinton White House and resigned in 1996, making Huckabee Governor. Huckabee, who was at that time the Republican nominee for U.S. Senate, stepped out of that race and began serving as Governor. He was elected to his first full term in his own right in 1998 and won re-election in 2002, both times with single-digit margins of victory over his Democratic opponents. He announced his candidacy for the Presidency about three weeks after his second term as Governor had expired in January of 2007.

Abortion: Pro-life; would discontinue Federal support of all organizations that promote abortion in any way. Likens abortion to slavery. Rating: 0 of 1 points.

Anti-Terrorism Policy: Believes expanding the military, especially the Army, will combat terrorism. Stresses emergency preparedness for response to terror attacks. Believes that America is currently engaged in a world war against terrorism, but lists anti-terrorism policy twelfth on a list of seventeen planks in his platform (immigration appears twice), suggesting that this is not a high priority for him. Rating: 2 of 7 points.

Balanced Budget: Would increase federal spending on a variety of health and public welfare programs, such as care for children with AIDS and obesity prevention. Arkansas’ constitution requires the budget to be balanced each year. Rating: 0 of 8 points.

Civil Liberties: In addition to outspoken opposition to same-sex marriage or domestic partnerships, he has advocated quarantine of homosexuals who test positive for AIDS. Also has suggested amenability to a national ban on smoking and aggressive health promotion programs. Opposed to gun control. Encouraged aggressive policing of anti-pornography laws as governor of Arkansas. Has a consistent history of combatting racism in both private and public sectors. Rating: 1 of 9 points.

Education: Places emphasis on teaching the arts as well as other subjects at elementary and high school levels. As Governor, pushed hard to increase use of charter schools, raise teacher salaries and advocated for teacher testing. Would continue to fund abstinence-only sex education programs. Rating: 4 of 5 points.

Generalized Foreign Policy: Does not believe it is the job of the U.S. to export our brand of republican democracy. Wants to push Pakistan for greater accountability of foreign and military aid. Would try to strike a balance between maintaining U.S. sovereignty and earning the respect of other nations. Opposed to Law Of The Sea treaty. Rating: 2 of 6 points.

Immigration Policy: Advocates ocean-to-ocean fence, enhanced policing against employers, and beef up border patrols. Would also expand and streamline legal immigration and naturalization processes. Proposes that illegal immigrants will have 120 days after he takes office to register or go home. However, Huckabee does not appear to have a solid grasp of how the Federal Government works, at least with respect to this issue. (You may not have known that the INS no longer exists, having been subsumed by the PATRIOT Shuffle into part of the Department of Homeland Security back in 2003, but someone running for President probably should know that.) as Governor, was very welcoming to immigrants and advocated making a variety of state benefits, especially educational ones, available to illegal immigrants. Does not believe that illegal immigrants are taking a significant number of jobs away from citizens. Rating: 4 of 5 points.

Iraq: Opposes troop pullouts and believes that progress is currently being made towards quelling the insurgency and building a stable, prosperous Iraq under military leadership of General Patreaus. Stops short of saying we should establish “permanent” military bases, but opposes timetables for withdrawal of troops and seems to envision an open-ended deployment of troops in Iraq. Rating: 4 of 6 points.

Middle East Peace Process: Will back up Israel with military, economic, and diplomatic support on nearly unconditional basis and would make state-of-the-art technology available to Israeli military. Opposed to creation of Palestinian state. Rating: 2 of 4 points.

Science and Technology: Claims to have a “commitment” to science. Disbelieves evolution, but says he sees no dissonance between evolution and Biblical teachings. In the event that there were a conflict between the two, he would believe the Bible over than the teachings of science. Rating: 0 of 4 points.

Separation of Church and State: He’s a Baptist minister who says that his faith and religion “drive” all of his governmental decision-making. Does not believe it is possible or desirable to separate religion from politics. Advocates teaching “intelligent design” alongside evolutionary theory in public schools. Has called for impeachment of Federal judges who strike down prayer-in-school policies and advocated display of Ten Commandments in all public school classrooms. Rating: 0 of 5 points.

Social Security Reform: Does not support privatization but does support “personal accounts” with individual control over social security investments. Opposed cutting block grants for entitlement such as SSI; to oppose cutting benefits or timing of benefit eligibility. Rating: 1 of 5 points.

Taxes: Strongly endorses the idea of replacing income tax with a national sales tax (unlike Romney and Giuliani) called the FairTax. Under his tenure as Governor, the average Arkansas citizen’s state tax burden increased by 47%. Rating: 2 of 5 points.

Tort Reform: As Governor, signed into law limiting non-economic and punitive damages in medical malpractice cases to $1,000,000. Rating: 0 of 3 points.

Torture of U.S. Prisoners: Recently announced that he was opposed to waterboarding, changing his position from the usual GOP wishy-washiness about torture. Rating: 4 of 4 points.

Overall Impression: Well, I certainly don’t like him, but you’d probably have guessed that even before reading this. Andrew Sullivan got it exactly right: with relatively minor exceptions, Huckabee would “…advance [] the key policy blend begun by George W. Bush: nanny-statism, big government conservatism, fiscal profligacy, and theo-democracy. He is the logical consequence of Bushism, with a pleasing and disarming affect.” He promises everything I dislike about the Bush Administration with very little of the (scant) good things Bush has done. Huckabee is the best choice for those Republicans who think that the party and the country are on the right track.

Next up: Senator Barack Obama.

By the way, if current trends continue, there will be no analysis of Fred Thompson, as his national support level is currently at exactly 10% — and has been dropping steadily since September. John Edwards has been hovering around his current level (12.5%) for close to a year, so I will likely get to him after Senator Obama and Senator McCain. Ron Paul, Bill Richardson, and Joe Biden, while not of such low levels of support as to be mere background noise, have never met my “viability” threshold of 10% or more of national support within their own parties.

To get all of these summaries on a single page, scroll down to the topic headers on the right-hand index of the page, and click on “candidate analysis.”