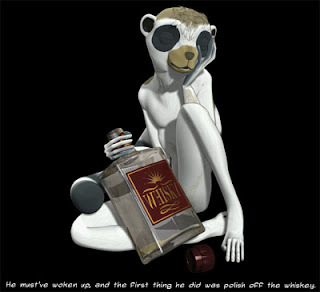 Even if he is, you may not want to post a sarcastic Dilbert comic strip that accuses him of it. This guy’s bosses got so mad at being impliedly called drunken lemurs that they reveiwed surveillance tapes to figure out who put up the strip on an office bulliten board. That’s a fair amount of effort to determine who’s guilty of a little sarcasm — especially when it happened the day after the same drunken lemurs had announced that half the workforce was about to be laid off. But no, instead of writing it off as a sign of poor morale — and gee, what could have caused poor morale at a workplace like this? — management instead disputed the guy’s application for unemployment insurance benefits! They lost, by the way; the author of the comic strip in question is no doubt correct to note that this is kind of a Phyrric victory for the terminated worker. Still, the whole thing smacks of a fair amount of malice on the part of the employer here. All the same, this is why I like employment law so much — you see stuff like this all the time.