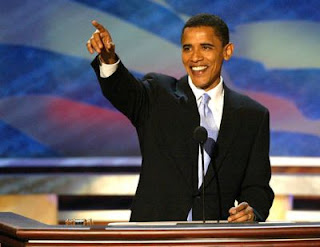 Barack Obama will be 47 years old on the next Inauguration Day.

Obama’s father was a Kenyan exchange student at the University of Hawaii when he met Obama’s mother, a student from Kansas. When Obama was two years old, his father separated from his mother; they later divorced as his father obtained a Ph.D. at Harvard and moved back to Kenya. He was raised by his mother, who later married an Indonesian man who worked as a diplomat for the U.S. State Department. Obama lived for five years in Jakarta, Indonesia until he was ten years old, and then moved back to Honolulu, where his family lived with his maternal grandparents, who had also moved to Honolulu. Obama’s father was killed in an auto accident when Obama was twenty-one years old; Obama’s mother died of ovarian cancer in 1995. He has one half-sister from his mother’s second marriage. His memoir describes being barely aware of his multiracial heritage while growing up, but seeking to dodge those issues as an adolescent and young adult through drug and alcohol abuse.

He originally attended Occidental College in Los Angeles, and later transferred from Oxy to Columbia University, where he was awarded a Bachelor’s Degree in political science with an emphasis in international relations. He worked for a year after getting his bachelor’s degree as an editor of an international finance publication, and then worked for five years as a community organizer in Chicago’s south side. He then went to Harvard Law School, where he was the first African-American editor-in-chief of the Harvard Law Review. While clerking at a large law firm in Chicago, he was mentored by a fellow Harvard Law graduate named Michelle Robinson; the two fell in love and were married.

He is one of the few candidates who admits to smoking cigarettes. I suspect quite a few of them do, from the stress of the campaign trial, but you’ll have to look long and hard for a photograph of them doing it. Well, he wouldn’t be the first.

Obama won his first election, gaining a seat in the Illinois State Senate representing the south side neighborhood of Hyde Park in a special election in 1996; he won re-election to a full term in 1998. In 2000, he unsuccessfully challenged an incumbent U.S. Congressman for the seat representing that area, but again won re-election to the state legislature in 2002. During this time, he appears to have kept his employment at the law firm in Chicago active and continued to lecture in Constitutional Law at the University of Chicago.

He did not complete his term, however, earning the Democratic nomination for U.S. Senate in 2004 after coming from behind in a three-way primary race in which he was dogged by rumors of domestic abuse. His anticipated Republican opponent, financier John Ryan, was forced to withdraw from the race about three months before the election after salacious details from his divorce from television actress Jeri Ryan became public; Ryan was replaced by Alan Keyes, whom Obama defeated handily. A significant boost to his campaign came from his selection as the keynote speaker at the 2004 Democratic National Convention, which he handled with extraordinary skill and charisma. After winning election, he resigned his academic and other professional positions. He was mentored for his first year in the U.S. Senate by Senator Hillary Rodham Clinton.

Abortion: Pro-choice. Has earned some flak for voting “present” in the Illinois Legislature on certain voting rights cases, but this seems to have been by arrangement and does not credibly diminish his pro-choice credential. Rating: 1 of 1 points.

Amending the Constitution: Opposed to amendments permitting criminalization of flag-burning and to permit states to prohibit same-sex marriage. Favors including sexual orientation as protected class for federal anti-discrimination legislation, and broadening scope of Americans with Disabilities Act. Rating: 6 of 6 points.

Anti-Terrorism Policy: Demands greater accountability for foreign aid and anti-terrorism money going to Pakistan. Would require inspection of significantly greater cargo coming in from overseas. Voted to implement recommendations of 9/11 Committee. Would make keeping nuclear weapons out of the hands of Iran a high priority, but stops short of saying he would use military force to effect that policy. Rating: 3 of 7 points.

Balanced Budget: Imaginative government policies, particularly in the areas of education and health care, would be very expensive. Does suggests that taxes should be “as low as we can afford them to be” consistent with government spending, suggesting that he would ask for tax increases to pay for his ambitious programs — but it does not seem that he has thought through just how much more spending he has suggested, and how to pay for it all. Does not seem to consider a balanced budget to be a high priority. Rating: 2 of 8 points.

Civil Liberties: Believes that human rights and national security are not mutually inconsistent but instead complement one another, and in cases where intelligence gathering potentially impacts individual rights, would seek a “balance.” (For instance, he would significantly limit but not flatly prohibit scope of governmental use of data miners and other automated search mechanisms because of privacy concerns.) Voted against warrantless wiretap provisions of PATRIOT Act and in favor of habeas corpus rights for Guantanamo detainees. Personally opposed to same-sex marriage but advocates civil unions. Strong professional history of anti-discrimination activism. Would increase distribution and application of parental-control technology to combat distribution of objectionable content while permitting access for those opting to see it. Favors gun control, particularly for automatic and semi-automatic weapons and in urban areas; voted “no” on legislation providing immunity for gun manufacturers for certain kinds of tort claims. Willing to consider national smoking ban to promote national health. Favors repeal of “Don’t Ask-Don’t Tell” policy and service of open gays and lesbians in the military. Rating: 7 of 9 points.

Environment: Wants 20% of U.S. fuel to come from renewable resources by 2020; wants increased use of nuclear power. Advocate increasing Federal mileage mandates to average of 40 mpg by 2020. Sponsored legislation advocating development of liquefied coal as an alternative fuel. Rating: 3 of 4 points.

Free Trade: Strongly opposed to CAFTA. Critical of farm subsidies for large corporations but not for “family farmers.” Recent rhetoric (“People don’t want a cheaper T-shirt if they’re losing a job in the process”) suggests a strong protectionist streak, and insists that Doha Round of GATT negotiations must produce “tangible benefits” for U.S. workers, but also claims loyalty to existing trade agreements. Would amend NAFTA to allow for labor agreements, and would advocate for greater human rights and opening of trade in China — but shrinks from a trade war with the PRC. Rating: 1 of 5 points.

Generalized Foreign Policy: Intemperately suggested that he would order unilateral military action in Pakistan if necessary to advance important terrorism goals. Has served on Senate Foreign Relations Committee since 2004. Willing to have face-to-face meeting with rival national leaders like Presidents of Iran and Venezuela, without preconditions to meetings. Advocates international efforts to limit manufacture and distribution of military weapons. Would give President $50 billion a year to prop up failing states. Views China as a “competitor” but not an enemy. Would impose no-fly zone in Darfur. Views many problems in Sub-Saharan Africa as resulting from internal racial tensions and political corruption. Favors expanding the military’s size. Rating: 2 of 6 points.

Health Care Reform: Would mandate employer health care coverage and has proposed a “national insurance pool” as alternative for those without employer coverage. Believe it is “immoral” to consider cost of health care when patient’s life is at stake. Stops short of advocacy of “universal health care,” but significantly expanded governmental coverage is obviously an indispensible part of his proposed reform package. Rating: 1 of 3 points.

Iraq: Opposed to “open-ended” commitment in Iraq. Presently favors immediate troop drawdown but opposes complete withdrawal. Hopes to have all troops home by 2013, but unsure if that goal can be fulfilled. Does not believe the “surge” of troops has worked. Inconsistently wants more ground troops and fewer troop rotations; previously has said that complete withdrawal should have begun in May of 2007 and set to be completed by March of 2008. Rating: 0 of 6 points.

Middle East Peace Process: Has vowed that the U.S. will never recognize Palestinian elected officials from Hamas until Hamas disavows advocacy of destruction of Israel. Finds fault with unflinching support of Israel. Rating: 2 of 4 points.

Science and Technology: Would increase grants for research into engineering, mathematics, and science education; suggests an additional $42 billion in university-level research grants with emphasis on “basic areas” of research. Believes deregulation was bad for airline industry. Favors upgrade of communication infrastructure, opposed to internet taxes and consolidation of service providers. Rating: 3 of 4 points.

Separation of Church and State: Has had moving personal religious experiences and thinks that asking individuals to set aside morals taught by their religion when contemplating issues of public concern is neither possible nor desirable. However, would ask that religious people translate their religions into statements of more universal application rather than framing their statements in religion-specific manners. Opposed bill permitted teacher-led prayer in schools in Illinois. Opposed to Rating: of 5 points.

Social Security Reform: Opposed to changing age or benefit amounts. Opposed to privatization, but would allow those earning over $97,500 to opt out. Would increase taxes on incomes over $97,500 per year (presumably, if they do not opt out of system). Rating: 0 of 5 points.

Taxes: Aside from social security tax increase, also advocates expanding Earned Income Tax Credit (which benefits low-income Americans). Did not vote on recent bill to prevent implementation of Alternative Minimum Tax for 2007 tax year (neither did Senators Clinton, McCain, Dodd, or Biden; the bill passed the Senate by a vote of 88-5). Believes that estate tax affects fewer than 2% of Americans, would make income tax “more progressive” and structure taxes to penalize companies that move jobs offshore. Opposed to internet taxation and communications taxes affecting internet access, including for broadband. Rating: 0 of 5 points.

Tort Reform: Voted in favor of Class Action Reform Act. When initially running for Senate, claimed there was a “crisis” in medical malpractice litigation caused by trial lawyers. Rating: 0 of 3 points.

Torture of U.S. Prisoners: “No torture, no exceptions, no loopholes.” Rating: 4 of 4 points.

Overall Impression: Obama is easily the most charismatic candidate in the race, for either party (IMHO, only Rudy Giuliani even comes close to Obama’s extraordinary magnetism). He projects a personality of youth, energy, and newness, which contrasts with his policy platform, which is pretty much the cookie-cutter mixture of policy positions designed to appeal to the Democratic party’s coalition of interest groups. Obama also does not appear to have as many contradictions and policy reversals in his background; however, his resume is somewhat less extensive than that of nearly any of his rivals for the Oval Office, so he has had less time over his career to accumulate such positions. Obama tries to project an image on the campaign trail as being somewhat to the left of Clinton, but an analysis of his platform does not support this.

Although he has taken some lumps on his relative inexperience, particularly with foreign policy, it does not appear that an Obama White House would push for policies significantly different than that of one headed by Hillary Clinton. The “inexperienced” label also does not fit well upon close analysis; his experience on the Foreign Relations Committee does seem to have informed his analysis of both anti-terrorism and diplomatic policy, although I do not agree with all of the directions he thinks are good ideas, particularly with respect to a number of inconsistent positions on Iraq apparently crafted to curry short-term political favor, which seem to have nothing to do with the situation on the ground there.

Where Clinton offers technocratic expertise, Obama offers charisma and relative youth — and his view of civil liberties is the healthiest, and most intellectually and morally sound, of any candidate in either party. If the next President must be a Democrat, I have a very mild preference for Clinton over Obama, but he offers some high points that have a strong allure.