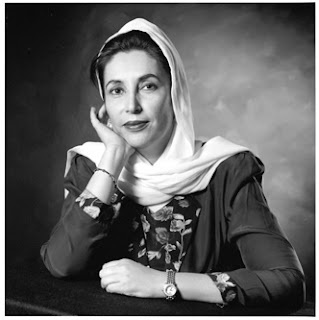 I’m unnerved to learn that earlier this morning, Benazir Bhutto was assassinated near her home in Pakistan. It’s seemed to me for a long time that Pakistan has a critical role to play in the ongoing geopolitical struggle which we have come to call the war on terror. Bhutto was not without her flaws — she led a government that was corrupt and may well have been corrupt herself — but at the same time she represented a truly moderating force in Muslim politics and social life. Her corruption was not significantly worse than that which is tolerated in many other places; good for the Pakistanis that they found it offensive.

This is a picture of the scene of the attack that ran on French media. While I think it’s within the scope of what to expect when reading about this kind of violence, it may nevertheless disturb some readers, so I’ve linked it instead of posting it.

Now, Pakistan is left without one of its significant leaders. Its people must choose between the secular military (almost) dictatorship of Pervez Musharraf, or a path leading towards fundamentalist theocracy. The third way of liberal democracy that Bhutto represented has lost its best leader in that nation.

I’ve come to realize that democracy is not always what’s best, at least in the short run, for particular nations. But I’m still enough of an idealist to think that it’s something that a nation should strive towards. As far as I know, there are no other political figures in Pakistan that stand clearly for the rule of law and obedience to the popular will. Musharraf pays lip service to those ideas to keep in the good graces of the West, but he is, functionally, the military dictator of a country which has aspirations towards being a Western-style democracy. Perhaps some figure will emerge to step into her shoes. Perhaps whoever sent in the suicide bomber to kill her will find that people will forget her flaws and that they have instead created a martyr for the cause of liberal democracy.

We can only hope. And here’s hoping that anyone who does step into her shoes doesn’t meet with her fate. Quite a lot depends on it.