Remember a year ago when Israel invaded Lebanon? What the hell was that about? Lebanon used to be the Paris of the Middle East. Now, here’s what you get in Beruit: 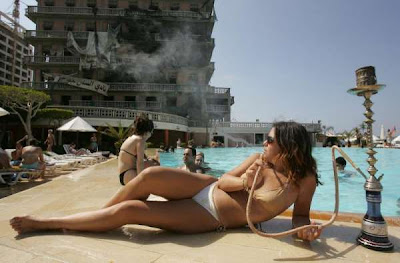 Syria continues to poke its fingers into Lebanon’s government. Iran continues to not-so-covertly fund Hezbollah, whose power in the southern part of the country remains unclear. Israel can knock out any installation it wants but it can’t secure the territory, so what’s the point? Syria can’t annex Lebanon, any more than Jordan could — so it’s kind of floating out there on its own, and no one really knows what to do with it or what kind of a future the country will have.

A guy from Toastmasters told a touching story once about his childhood in Beruit and his family fleeing their home on Christmas day because the Syrians were raiding the housing complexes for food. The old Lebanon had universities, nightclubs, good restaurants, lots of scenes like that photograph only with beautiful hotels instead of bombed-out shells dotting the skyline of Beruit. My guess is that there are still lots of people who want to see an open, democratic, liberalized society flourish in Lebanon. It looks like it would be a really interesting place to visit, with tons of history and lots of natural beauty.