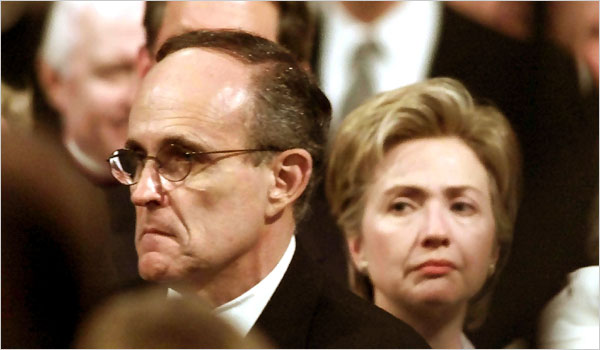 What if I had been right a year ago? What if the parties had nominated Rudy Giuliani and Hillary Clinton instead of Barack Obama and John McCain? Would the race be as one-sided with those candidates?

Personally, I think that if that had happened, Senator Clinton would still be the favorite to win, but the numbers wouldn’t look quite so grim. I think there would have been two reasons for that.

Rudy! for his part, would probably be a lot like McCain has been. It seems likely to me that Rudy! would have had to have confronted most of the same kinds of pressures that McCain did by way of trying to keep the Republican house of cards together — meaning he would probably have nominated someone with the same sorts of social conservative credentials as Sarah Palin. He might not have picked her, though, facing a female opponent directly. Instead, he might well have looked to J.C. Watts instead. But he’d have had to figure out how to run his own campaign while integrating the RNC machine and running their playbook, too — which means that organizationally and thematically, a Giuliani-Watts campaign would have worked out more or less like McCain-Palin.

The Georgia crisis would not have been as big a political football as it was. Hillary! and Rudy! would have had essentially the same reaction to the War In The Caucasus and both would have had the same level of credibility going out of that event as they had going in. As it was, the War In The Caucasus was politically good for McCain because regardless of the wisdom of the respective candidates’ reactions, they were different and the spin worked better for McCain.

The more profound domestic economic collapse, though, is the big question. Rudy! would have taken a hit, no doubt, for the same reason that McCain did — when the shit hits the fan at home, you do not want to be the nominee of the incumbent party, no matter how striking a difference you’ve been able to draw between yourself and the incumbent. So I think that would have been to Hillary!’s net advantage. But I think Rudy! would have had a savvier reaction to the crisis and the bailout than did McCain — not having to go to the Senate himself and be expected to vote in favor of it, he could have criticized it from the outside. This would have gained him big political points.

I’m assuming that no one would have dragged out any more skeletons from Rudy!’s closet, that the conservative right wing would have rallied around Watts as the running mate and drummed itself up into a frenzy about the evils of another Clinton Presidency, and that the public in general would have suffered from no small degree of Clinton fatigue. Some of these are the same kinds of hazards that Obama has weathered, some are not. And then there’s the fact that Rudy! is just plain more charismatic than Hillary!, counterbalanced by Rudy! having to thread the needle just so on abortion to keep his party unified, something that his actual candidacy simply could not finesse.

By this point, most of the country would have become sick to death of both of them. Why? Because it would have probably been the most negative, nasty, personal, and dirty campaign since Adams took on Jefferson in 1800. And people get tired of that. The result would be a dramatically depressed voter turnout — and low voter turnout tends to favor Republicans, whose electoral base is better-trained to show up and vote whether they’re happy about their choices or not.

There’s a good chance that I’d have grown disaffected with Rudy! by now, myself, and still wound up voting Libertarian.

But, based on all of these wild speculations, if it had been Hillary! versus Rudy! I’d say that Hillary! would have an overall sixty to sixty-five percent chance of winning right now, with the Electoral College map looking a lot like it did in 2004, and battlegrounds in Florida, Ohio, Virginia, Missouri, and Colorado. Yes, Rudy! would have to run the table of those states, but he’d have a realistic, although not probable, shot at doing that by now.

That’s how I think it would have looked a week out if the two pre-primary favorites had succeeded as projected.