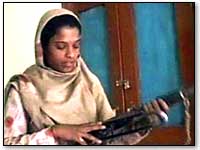 If anyone deserves an award with the thoroughly awesome name “Badass of the Week,” it’s got to be this 18-year-old Kashmiri woman named Rukhsana Kauser.  Abigail Adams once wrote to her husband while he was at the Continental Congress, “Remember the ladies!”  Rukhsana Kauser would have added to that, “Yeah, because if you don’t, we’ll jack you up like prison bitches.”  The world has one less shithead to deal with, and at least one rape and likely four or more murders prevented because of Ms. Kauser.

The write-up of her story is quite entertaining, too.  She should pursue a career in the military and if India won’t have her, we should make her an offer.