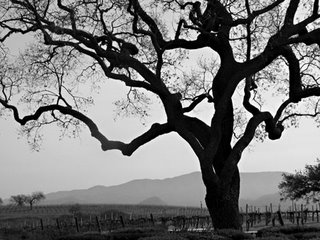 This weekend, The Wife and I went with our friends to go wine tasting in the beautiful Santa Ynez valley. I’ve long been a fan of this region and have grown familiar with the area’s geography and many of the wineries. While it had been a few years since I’d been there last and a little bit of my geography was rough around the edges (I forgot a few place names) for the most part it was very nice to be back there. The landscape is gorgeous — rolling hills and rocky river canyons, covered with golden grass and neatly-manicured grapevines, studded with gigantic green oak trees. The wine was quite nice and the companionship everything we could have asked for. 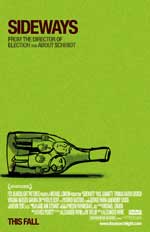 One problem, though, is the local fascination with an arthouse movie from about two years ago, Sideways. The filmmakers, as enchanted with the region and the fruit of the vine available there as I was, decided to use real wineries as locations, and used their real names for publicity. As a result, the day trip to Santa Barbara for wine tasting, and particularly the wineries that were featured in the movie, have become much more popular. This has changed their character somewhat — they are offering “megatastings” of ten to twelve wines, and asking ten to fifteen dollars for each. I preferred the six-wines-for-five-dollars deal that used to be the market price there; after about six wines in reasonably quick order, the palate begins to dull and it’s all grape juice.

The wine itself is still good and the day up in the area is still very enjoyable. But it’s more commericalized now than I remember it being in the past. My favorite places have not changed the way they do business, but several others have, and that’s too bad. For the Sideways-ized wineries, the tasting rooms themselves are now independent profit centers rather than break-even operations intended to advertise wine sales. Wine prices have gone up a little bit, too, although this was not as dramatic a rise in prices as to have been much more than inflation. I guess this kind of commercial gentrification was inevitable — whether there had been a movie or not, the secret was not bound to last. But why did they have to take away all the flush toilets and replace them with porta-potties? When you’re drinking wine, this can become an issue.

The Wife was not feeling very well in the afternoon; I think the heat got to her. She was a good sport and didn’t foist off her discomfort on the rest of us, although I was still concerned that she was not having a good time. It was bloody hot Saturday — one of the booth workers said it got up to 112 degrees that day. Still, a day wine-tasting is still a day well-spent. We had a great lunch at a nice bistro in Los Olivos; we bought a custard kringle strip in Solvang; we drank some nice wines and enjoyed the company of our friends. And that’s what it was really all about.