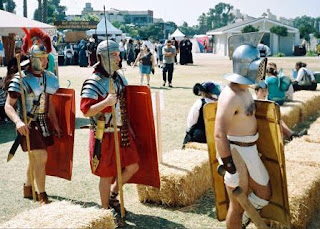 John Edwards announced a few weeks ago, and became the first candidate anticipated to have a big impact on the race to formally declare. About 45 minutes ago, Hillary Rodham Clinton, another one of the big players, formally declared her candidacy. The third Democrat making big noise, Barack Obama, has so far only formed an exploratory committee. So far, no formal announcements from any Republicans; Guiliani, McCain, and Romney are all in the exploratory committee phase.

This seems about right to me — Edwards and Clinton have fundraising machinery left over from previous national campaigns (Clinton’s will be borrowed from her husband to some degree) but of the other candidates, only McCain has even attempted a national campaign, and he didn’t get very far, and it was six years ago. The point of having an “exploratory committee” is to let people know that you’re interested in the job and to try and build a network of support. So the other four candidates have some building to do, while Edwards and Clinton can have a higher degree of confidence at an early stage that there will be money to fuel their campaigns.

CNN has a graphic that shows something like a dozen contenders in each party right now. I’ve had back luck with linking to CNN’s popup boxes before, but I’ll gamely try again. My suspicion, though, is that there’s a little reaching going on there. Many of the mentioned “candidates,” like Newt Gingrich, Al Gore, John Kerry, and Condoleezza Rice, would only be medium-sized fish if they did start angling for their parties’ nominations, which they have not yet done (and in Rice’s case, she has openly disclaimed any interest in the job). The rest are, no disrespect intended, little fish. Bill Richardson and Wesley Clark might be able to grow in stature somewhat, but I’m just not going to put any money down on a Tom Tancredo or a Jim Gilmore, or on the other side a Tom Vilsack or a Dennis Kucinich.

Iowa’s caucuses, the first actual measure of any kind of voter support (and hardly a meaningful measurement at that) will not be held for another fifty-one weeks, until January 14, 2008. Between now and then, the only quantifiable measure we will have of support will be fundraising and press attention. I’ve expressed my preference.