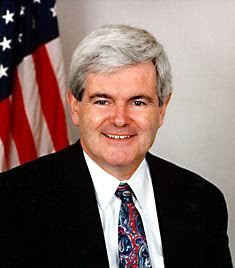 I’ve been wondering about all the reports about Newt Gingrich running for President when I haven’t heard “boo” about that prospect on any of the many news websites I read so voraciously. So, when in doubt, you take you chances and turn to wikipedia, the encyclopedia that unfortunately, anyone can edit.

So it seems that Newt said last June that if no front-runner emerges, he might step forward to claim that spot, and he would decide that in fall of 2007. And although it seems that there are two strong contenders right now on the GOP side, Gingrich has been spending a lot of time sucking up to Iowa and finding strange political bedfellows.

But it’s the speechifying in New Hampshire (another telltale sign of Presidential agitation) that has me worried. Quoth Newt in a speech intended by its sponsors to honor heroes of the First Amendment:

We need to get ahead of the curve rather than wait until we actually literally lose a city, which I think could literally happen in the next decade if we’re unfortunate. … We now should be impaneling people to look seriously at a level of supervision that we would never dream of if it weren’t for the scale of the threat. … Either before we lose a city or, if we are truly stupid, after we lose a city, we will adopt rules of engagement that use every technology we can find to break up their capacity to use the Internet, to break up their capacity to use free speech, and to go after people who want to kill us to stop them from recruiting people. … We should propose a Geneva Convention for fighting terrorism, which makes very clear that those who would fight outside the rules of law, those who would use weapons of mass destruction, and those who would target civilians are, in fact, subject to a totally different set of rules that allow us to protect civilization by defeating barbarism before it gains so much strength that it is truly horrendous.

Well-motivated, perhaps; you can’t fault a man interested in being President for demonstrating how seriously he takes the job of defending America. But Loyal Readers will note the following elements within Newt’s speech:

I had higher expectations of Gingrich than this. The flattery is odious but perhaps warrants a pass; he is trying to build political capital, after all. But I want a President who inspires us to be strong, not one who tells us to be afraid of shadows.

It’s particularly disappointing because Gingrich can be much better than this when he chooses to. He is an eloquent speaker, a powerful thinker, an accomplished writer and can be, when he wishes, a nuanced, realistic, but focused and persuasive politician with significant charisma. An emphasis on national security is a fine platform, but I would have hoped that a historian, of all people, would keep in mind that in saving America from her enemies, our leaders ought not to change the meaning of what it is to be an American in the first place.

Should Gingrich run — and be able to raise money to finance his campaign — I have little doubt he would be a formidable contender. And a little looking around indicates that yes, he is quite interested in the job and doing what it takes to get the job of President. But he’s hesitating to form even an exploratory committee. And he’s indicated that he’s willing to continue the same forced-choice balancing of civil rights against national security that the current Administration has been pursuing.

But Gingrich’s vision here is is wrong. It’s not a forced choice. I want a President whose vision of the future includes both liberty and security, both prosperity and justice, both the respect of the world for our moral goodness and the confidence to exercise our prowess when necessary. Unless you are convinced that our arc of national power has crested and we are now in a period of historical decline, we are yet a sufficiently wealthy and powerful nation to not have to give up some these things to realize the others.

Franklin Roosevelt told us “the only thing we have to fear is fear itself” — this while preparing to face down the two most powerful military opponents with whom the United States has ever crossed swords, enemies who captured almost all of Europe, much of Asia, and most of the Pacific. He inspired a deeply-troubled nation to rise to the challenge and in so doing transformed an economic basket case of a country to become a global superpower. He made tough choices along the way, not all of them the right ones, but with more good decisions than bad ones. He did it while inspiring courage and effort, by assuring America that it could rise to the challenge, and by appealing to our sense of pride and honor.

Those are not the rhetorical appeals that Gingrich is making these days. So should you become President, Mr. Gingrich, I hope you rediscover your optimism and power to inspire what is good and strong about our country, and take someone like Roosevelt rather than someone like your immediate predecessor, as your model. Or better yet, clear out of the field entirely, accept your role as an elder statesman with honor and grace, and finally above the fray of partisan politics, dispense the tremendous wisdom you have to offer from (and within, and to) the academy, where you are much needed and can best put your considerable talents to good use.