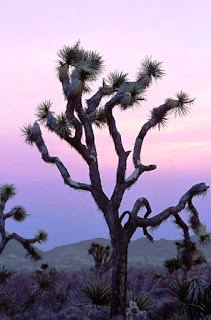 I see some strange things out in the desert driving to teach my class. With my high beams on and the unique perspective offered from moving at sixty miles an hour through a desert in the midst of a cloudy night, everything looks eerie and alien.

Start with the Joshua trees that stud the desert plain. Their strange shapes look like upside-down lightning bolts, splitting from the trunk at odd angles, shooting sharp spikes in all directions.

Then, the low clouds obscure the familiar sights of the nearby cities. Up in the mountains a strange, unearthly glow is seen, that looks like luminescent smoke. These are the ski areas’ bright lights, illuminating the ski runs. But from the floor of the desert, it looks like the soul of the mountain venturing out from the stone to look around the world.

The clouds themselves glow. Above them, a nearly-full moon reflects pale, cold, gray sunlight casting the sky with wisps of platinum. Except over Palmdale and Lancaster, my destination far off in the west. There, a bubble of red light seems to come to rest on the ground above the cities. This is not the sunset — that happened hours ago. It is from different kinds of street lights, shedding excess illumination into the sky. Occasionally, a bright star can be seen through a hole in the cloud cover, but mostly the sky is a ceiling of shadows and fog.

Closer to earth, bats and owls* flit about in the depths of the desert. And something that looked like a streamer of paper towels flies overhead. Perhaps it was some bit of trash or litter that a bird picked up to carry back to its nest? Small creatures jump away from my oncoming headlights — those look like frogs! How can frogs survive out in the desert on a day when there is no rain?

And then there’s the earth itself — buttes, hills, boulders, and other formations. All cast strange shadows at night, aglow with the diffuse moonlight like so many eggs and marbles poured into gigantic piles on the desert floor.

No tumbleweeds, though. I remember there were lots of tumbleweeds when I was a kid out here, but I haven’t seen too many of them since we moved back last summer. I would have thought that they would still be common. Maybe it’s not the season yet, or I’m spending all my time in urbanized areas where they just don’t grow.

* Owls freak me out. There’s no good reason for it, but they just spook me. They’re pretty when they’re just perched on a tree or something. When an owl opens its mouth, it rotates its whole face up over its skull. That ain’t right, man.