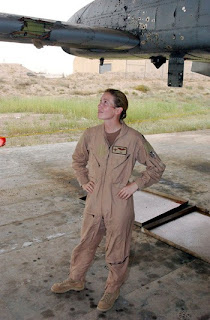 While reading comments about a rumored replacement for the SR-71, I came across a story of Captain Kim Campbell. I was impressed by her story.

Back in 2003, we (meaning the United States and the British, and some Spaniards and Italians, a token force from Imperial Tonga, a handful of Mongolians who remembered that they hadn’t conquered Mesopotamia for more than seven hundred hundred years)* were doing a little thing called Operation Iraqi Freedom.

You may recall, Loyal Reader, that while that phase of the war was fast, it was not instantaneous and it took several days of air war to soften up the enemy before the city of Baghdad could be taken. During that phase of the operations, Capt. Campbell’s mission was to provide support and cover for ground operations in and around the city. Her A-10 Warthog was hit with heavy Iraqi anti-aircraft fire while maneuvering between support runs. The result was this: 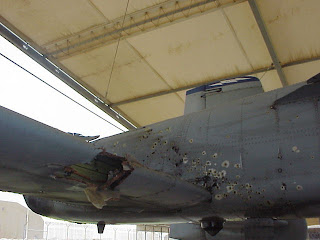 Suddenly, Captain Campbell was piloting a very unhappy airplane. She lost hydraulic control and had to land the plane without operational brakes and with her ability to steer the plane laterally severely limited. She had to decide whether or not her chances for survival were better if she ejected, which of course would mean abandoning the aircraft.

She opted instead to switch to manual control (meaning she would have to push and pull the flaps and other navigational controls by hand, with her own physical strength) and flew the plane back to base. Without brakes and with very little ability to steer, she landed the plane safely and under control, and walked away without a scratch. Not every pilot or soldier has been as fortunate as she, of course. But having come across the story recently, I think we can all be proud that Captain Campbell is a reminder of the kind of stuff that people serving in the military are made of.