Truth is properly defined in objective, not subjective, terms. I define a “subjective truth” here as “something that I agree with.” You might not agree with me, which makes your opinion wrong. For example, “Most country music is tedious, repetitious, uninteresting, and unappealing.” That statement could not be more true for me. It truly bores me and I truly find it disagreeable. But perhaps you, Loyal Reader, really like country music and disagree with my “truth.” An objective truth, however, is something that is equally true for everyone, and one’s opinion on the subject is irrelevant. It doesn’t matter how much I think Iran ought to be a secular democracy — it is not a secular democracy, and no amount of normative thought on my part will change that. Rather than being an opinion, it is simply a reality that the country is ruled by a self-appointed council of mullahs who are above the rule of, and ultimately control, the civil government there.*

Much of the problems with our public discourse lies in people confusing their subjective opinions with objective reality, since both can be defined as “truth.” I saw this graph a while back on the cover of the California Bar Journal. It was the banner article, decrying the lack of gender and racial diversity on the California bench: 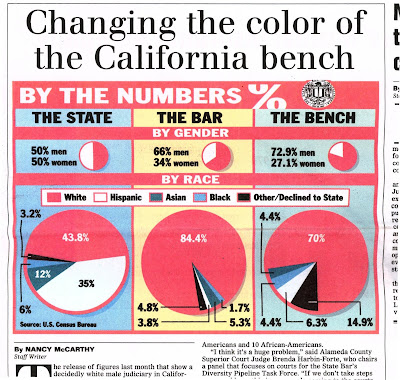 In case the picture compression loses some detail, it notes that the bench consists of 72.9% men and only 27.1% women; and that while whites are only 43.8% of the general population, 70% of California’s judges are white. (Which is not surprising, since 84.4% of California’s lawyers are white, providing ammunition for an argument that whites are underrepresented on the bench, but that’s an issue for another day.)

But this afternoon, I looked at the graphs again and thought to myself, “Self, that doesn’t look right.” And that’s when I realized that the pie charts used to illustrate the demographic composition of the judiciary aren’t even remotely right. On top, the complaint is that women hold just over one-quarter of the seats on the bench. But the chart shows a slice of the pie that looks more like one-sixth. On the bottom, the complaint is that 70% of the judges in this state are white, but that slice of the pie is visibly more than 75% (three-quarters) of the whole. The real graphs should look like this: 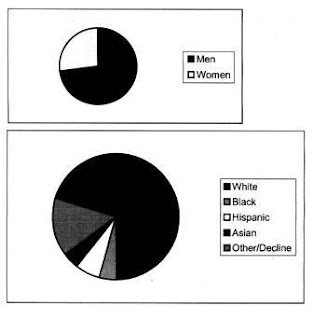 Now, I know as well as any lawyer how to lie with statistics. And you can even make graphs convey a favorable, or rather less disfavorable, impression than might initially seem possible with a little thought. One might arrange how the slices of the pie are set up; if I was faced with having to apologize for an overwhelmingly large slice of a pie, I might break that slice down into sub-groups, for instance. But I’d never be so brazen as to simply misdraw a graph like that. One-sixth is substantialy less than one-quarter. Seventy percent is less than three quarters. There’s no getting around that.

Also not that, at least as to the general population, the bar’s numbers are simply wrong. The U.S. Census reports that the plurality racial group in California is Latino (aka “Hispanic”), not white, and that women are about 51% of the population and men 49%. This data, of course, highlights the argument that whites and men are overrepresented within the judiciary. But if you’re going to look at these kinds of numbers and draw these kinds of conclusions, the first step should be getting good information to base them on.

Diversity on the bench is an issue worth considering. When I took my training to be a pro tem judge, I learned that minority groups can, and often do, feel as though they do not get a fair shake in the courts. African-Americans (aka “Blacks”) in particular report that they believe that the justice system is weighted against them and they are not treated fairly by the courts. This is also true, with moderately lesser intensity, by Latinos (aka “Hispanics”). So if there are judges who look like the people who are coming to court to receive justice, this may well improve their receptivity to the results that they get.

At the same time, of course, it’s critical that the judges are qualified for the job and that they be of appropriate temprament and demeanor. We need smart, fair, and most importantly, trustworthy people on the bench. These are not aspects of a person that can be quantified very easily, and the system of hand-picking the judges through political appointment and election is certainly not without its failures in the arenas of intellectual qualification and temprament. But not matter how we pick our judges, these things have to take a front seat to demographic concerns.

So I’m not convinced that a demographic imbalance on the bench is such a critical issue to begin with. But I do know that that imbalance is not as dramatic the bar journal’s graphic artist has depicted it. At best, this was a mistake; at worst, it is an attempt to advance an agenda through deceptive means — and the substantial likelihood is that it is somewhere in between; the artist has an opinion on the issue and because of that opinion, he did not look critically at his own work to see if it was accurate, since it left an impression of “truth” in his mind.

* You know, if the mullahs in Iran were taken out of the picture (that’s a big “if”), it seems to me that the civil government that would be left over would probably be sufficiently democratic that we would have to accept it as legitimate. We don’t always like the results of democracy in other countries, as in Hamas’ electoral victory in the Palestinian Authority, but it’s a whole different story if we think another nation voted the wrong way, as with the Palestinians, as opposed to seeing that the election was not really meaningful in the first place, as in Iran.