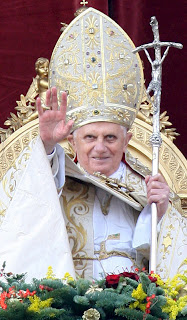 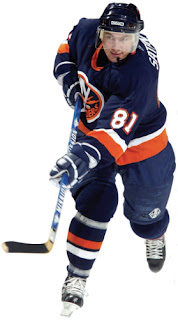 Avowed enemy of “godlessness” Pope Benedict XVI has announced that there need to be more exorcisms. Seems that more priests need to be trained in directly fighting the Devil, a prayer needs to be added to the end of the Mass to invoke God’s protection from diabolical influence, and parish priests need to be trained to fight the interest of young people in the occult being distributed by the Internets and that damn rock music.

I’m not making any of this up. RTFA and see for yourself.

Satan himself appears unconcerned as you can see at right. As of Wednesday, Satan’s career points total was exactly 666. So is it a coincidence that the Pope makes this announcement now?

The unretouched photograph of His Holiness to the left demonstrates to my satisfaction that if anyone is possessed, it may well be His Holiness himself. Creepy. A guy who looks like that should get lines like: “Senator, just one more thing… love your suit!” And here you thought he was just some German dude in a funny hat.

Maybe the fact that Satan is playing against the Devils tomorrow after all but singlehandedly defeating them six weeks ago means that maybe it’s the Pope who is rooting for the Devils (I thought he played defense for St. Louis, actually), and Satan who truly opposes them… Oh, this hurts my head.