I was doing arraignments this morning. The defendant, let’s call him “Mr. Ramos” (even though that’s not his real name), was charged with two counts: speeding, and driving without insurance. He appeared before me wearing a Dallas Cowboys sweatshirt and a blue beanie with a blue-and-silver star on it. He handed his paperwork to the bailiff.

“Mr. Ramos, you’re before me today on two counts, speeding and driving without insurance, on a ticket issued by the California Highway Patrol on July 27, 2007. How do you plead?”

“Your honor,” the bailiff said, “the defendant has presented the court with a certificate of insurance that was in effect from July 1, 2007 through July 1, 2008.” 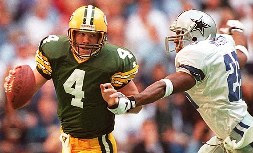 “Okay,” I said. “It appearing that you had insurance in effect on the date of the violation, Mr. Ramos, I’ll dismiss the second count against you. This despite the fact that you are obviously a Cowboys fan, and the Court happens to favor the Green Bay Packers.” Even Mr. Ramos laughed at that.

He pled “no contest” to the speeding charge.