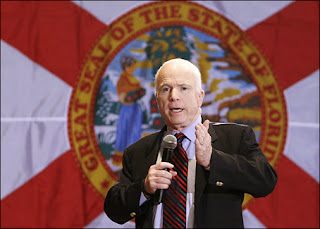 The Florida polls just closed about fifteen minutes ago, and some early voting and absentee ballots have been reported. McCain has about 34% of the vote and Romney has about 33%, and if the early numbers are any indication, a winner will not be called for several hours. Giuliani and Huckabee are fighting it out for third place, splitting the leftover one-third of the vote nearly equally between themselves. Giuliani looks right now like he’ll win that fight, although he had hoped not to be on the undercard and even winning there is far from certain.

Early returns are sometimes a bit skewed from the regular live vote, but it doesn’t seem to be that way this time around. The patterns are more or less the same in random samplings of counties across the state — rural and urban, north and south, alike. So I’d expect that those two will get the lion’s share of the delegates, and Giuliani and Huckabee will wind up with a few each.

So — given the format of the upcoming elections on February 5, Rudy will probably keep on campaigning to pick up some delegates and support. Then he’ll probably drop out and wind up endorsing McCain. Which is not the right move if he really wants to be the kingmaker between McCain and Romney — he needs to drop out and make that endorsement tomorrow because he has proven that his efforts and charisma can and do attract votes — and this would throw a ton of votes McCain’s way, adding nearly half again to his support and giving him a decisive lead against Romney instead of merely a statistical one.

Maybe Rudy could do that tomorrow night, on live TV, during the debate. That would be fun. He’d have to work out a substantial compensation to himself for doing so, of course (Vice President? Secretary of Homeland Security?), and that’s something that his people need to negotiate with McCain’s people right quick.

Interestingly, my folks reported a lot of negative thought about Hilary Clinton from the people they’d spoken with during their recent trip; they believe that they met with about equal numbers of Democrats and Republicans and no one had anything good to say about Senator Clinton. But she’s handily beating Senator Obama and as soon as they could, all the networks called the primary there for her. 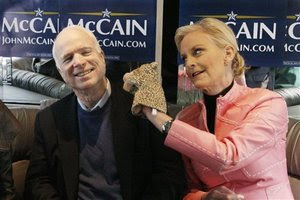 UPDATE: McCain did win, and it does look like Giuliani will drop out and endorse McCain. Huckabee, however, says he’s in to play “all nine innings.” While that sounds nice, he’s also quickly going to become not much of a factor; exit polls in Florida show that the evangelical voters in Florida split evenly between Romney, Huckabee, and McCain. Florida is somewhat more evangelical than the rest of the GOP (nearly 4 in 10 exit poll respondents self-identified as evangelical) but even so, if Huckabee’s draw leaves that bloc of voters split more or less evenly, his participation or non-participation in the race won’t affect the outcome of what has become a two-candidate race.

There are GOP caucuses in Maine on Friday, but that’s a non-event since the delegates that will result from the state convention delegates selected at those caucuses are required by Maine law to go to the convention unpledged. No, the big deal is that Giuliani will throw his support behind McCain, and although Hizzonner’s numbers are nothing like what they used to be, there is still some force there and between his win tonight and that endorsement, Romney is now at a significant disadvantage.

Barring a substantial resurgence by Mitt Romney this week, the United States will elect its first sitting Senator to the White House since 1960.

SECOND UPDATE: John Edwards is out, too. A trial lawyer acquaintance from Nashville will be very disappointed, but it’s hard to see what exactly Edwards would have gained by continuing. It remains to be seen if Edwards will endorse or not, but I’d expect more of his supporters to go to Obama than to Clinton.